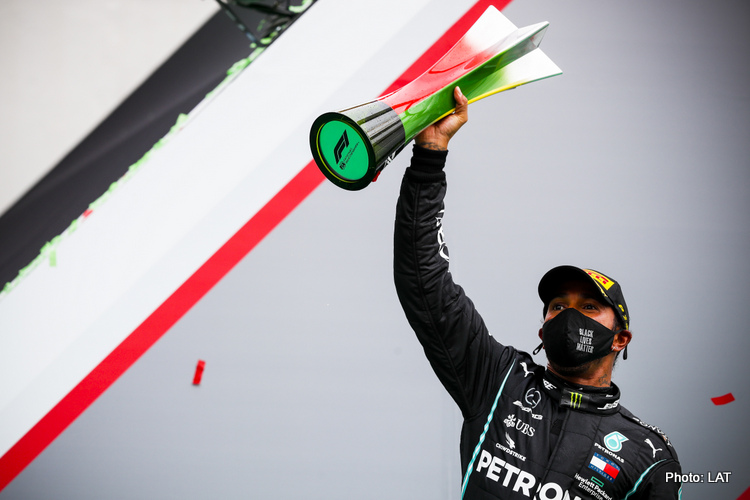 It may have been an inevitability, but that doesn’t make Lewis Hamilton’s record-setting 92nd Formula 1 victory on Sunday any less remarkable.

Woods. Federer. James. Tendulkar. Rossi. Nadal. Phelps. Bolt. Schumacher… and Lewis Hamilton. When it comes to sporting legends of the 21st century, there is simply no denying the winner of Sunday’s Portuguese Grand Prix belongs on that list.

Love him or hate him, it’s impossible to get around the sheer enormity of 92 grand prix victories. Yes, he’s had some dominant cars underneath him. Yes, he’s had more races per season with those cars. And yes, there’s legitimate questions about the relative quality of the teammate he’s had for the past four seasons, but you simply don’t get where he has gotten without being ridiculously great at what you do.

Just consider his effort this weekend. He starts on pole for the 97th time in his career, but loses out to two cars on lap 1, one of those being his teammate Valtteri Bottas, takes 20 laps to get his lead back, battles severe cramp, and still wins by 25 seconds.

Had he never got his lead back, I don’t think many would have made much of it. We would’ve said, “well he had a slow start on the mediums, Bottas did a better job and in the same machinery it was always going to be difficult to pass”. And, as anyone who has ever had a proper cramp before knows, you don’t feel like doing much beside grabbing in agony at the offending body part, let alone driving a race car. To win in the fashion he did is nothing short of incredible, and a testament to a driver that deserves his place in the record books.

Hell of a first lap from Kimi Raikkonen. Shame the Alfa Romeo didn’t have the pace to make it count, though.

Explosive stuff from Sebastian Vettel in his post-race remarks to RTL. Could Ferrari really be giving him a worse car? My question: with the headspace he’s in, does it matter?

Unsurprisingly Christian Horner is sticking by his man in Alex Albon, but I do wonder: if he could match Pierre Gasly in the AlphaTauri, why not use these final five races of the season to find out? Drop Kvyat, put Albon in, and use the opportunity to test Nico Hulkenberg across from Max Verstappen. That way we’d know which of the three would be best for 2021, instead of just constantly speculating.

Last after the opening lap, the Mexican managed to get his Racing Point up to P7 at the flag with a drive that conclusively proves he deserves to stay on the F1 grid.

Worst of the Day: Lance Stroll

In contrast, Lance was nothing short of dismal. As good as he’s been at times in 2020, this was the young Canadian at his worst.

“I’m thinking of Michael today, I will forever have the utmost admiration and respect for you, it’s truly been an honour to be mentioned in the same sentence as you.” – Lewis Hamilton, with some nice words for the great man who came before him.