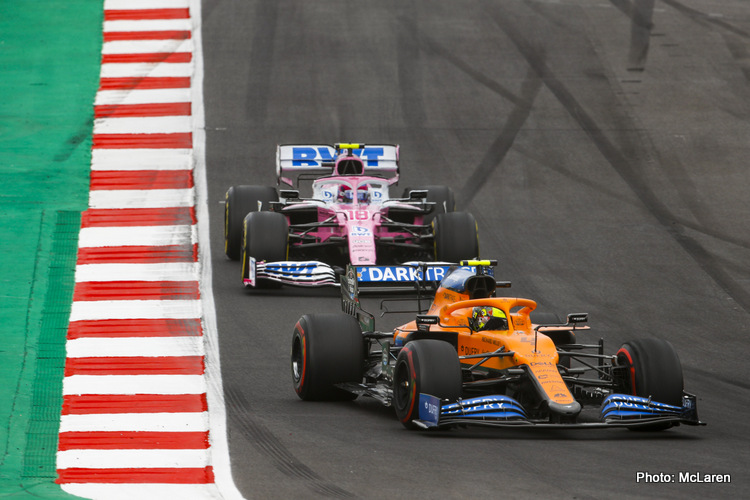 McLaren’s Lando Norris has sharply criticised Lance Stroll after their crash in Sunday’s Portuguese Grand Prix, suggesting the Canadian “doesn’t seem to learn” from his mistakes.

Coming together in a turn 1 clash on lap 18, Stroll tried to go around the outside of Norris in his Racing Point despite starting his move wide on the kerb, and turned into the McLaren as the two came through the apex of the corner.

The subsequent damage meant Norris’ race was ruined as he was forced to pit, while Stroll received a five-second time penalty for the incident, and subsequently earned a second such penalty for exceeding track limits before retiring his car with 15 laps to go.

The incident followed a similar entanglement for Stroll in Friday’s second practice, wherein he collided with Red Bull’s Max Verstappen on corner turn-in, although his culpability on that occasion was much more debatable.

Nevertheless, Norris clearly saw a pattern in his scathing assessment of the Canadian post-race.

“I don’t know what he was doing really,” he said. “I don’t know where he was really. He went to the left, which I was quite surprised by when he easily could have gone to the inside. I was easily halfway alongside, and he just turns in.

“He obviously didn’t learn from Friday, but he doesn’t seem to learn with anything he does. It happens a lot, so I just need to make sure I stay away.”

Unfortunately for Norris, his race didn’t get any easier from then on as he later suffered a slow puncture, ultimately ending-up 13th.

“I was just on my own for a lot of the race. We were struggling a lot with the wind initially, and then I had a puncture which meant I had to box again on the second stop.

“Then the final stint, we were quick, and we had good pace, but we were just way too far behind where we should have been.

“It’s a shame, we could have scored some points today, but it just wasn’t to be.”