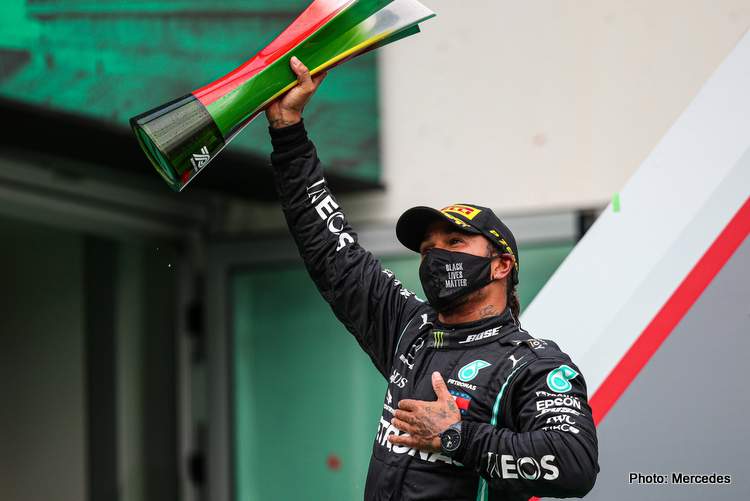 British Formula 1 superstar and overachiever Lewis Hamilton’s omission from the current list of sporting greats who have received a knighthood has been described as “unacceptable” by Lord Hain, the former Labour cabinet minister.

Following Hamilton’s sixth F1 world championship triumph last year, Hain wrote to Prime Minister Boris Johnson making the case for the British driver to be granted an upgrade on the MBE he was awarded 12 years ago.

But Hamilton’s achievements were overlooked in the subsequent New Year honours’ list.

On Sunday, the 35-year-old from Stevenage, claimed the 92nd win of his career to stand alone as Formula 1’s most victorious driver of all-time.

He is also set to close out a record-equalling seventh world championship next month.

“You have got Andy Murray, Mo Farah, Bradley Wiggins who have all been given knighthoods in recent years, and I cannot understand why Lewis Hamilton hasn’t,” Hain, who serves as Vice-Chair of the All Parliamentary Group on F1, told the PA news agency. “Frankly, it is unacceptable.

“He has broken the record for the number of Formula One races won, and he will be a world champion for a seventh time – records that are unlikely to be surpassed.

“This is a kid from a very deprived background, who is black, and has made it in what is a rich person’s sport – an incredible achievement.

“He has been inspirational on the whole question of racism and Black Lives Matter. He supports charities and works on climate change.

“On the topic of tax, which is said to be a niggle, Lewis is a top British taxpayer. He has a house in London, and I have explained all of this. It’s baffling.”

Hain confirmed he intends to write a second letter to Downing Street when Hamilton, who holds a 77-point over Valtteri Bottas with just five races remaining, secures his seventh title – most likely to be at the Turkish Grand Prix on November 15.

But he added: “I don’t think it needs a letter from me, to be frank. It should have happened already and it needs to happen now.”

Hamilton celebrated his landmark triumph at the Portuguese Grand Prix with his father, Anthony.

Anthony worked four jobs to pave the way for his first son to start out in motor racing. Estranged for a number of years after Lewis sacked Anthony as his manager in 2010, they shared a long embrace after the race.

“To a degree, I think the UK has missed a trick if they don’t want to recognise Lewis,” said Hamilton senior.

“At the end of the day, the encouragement is if you want to better your life then be decent people. We’ve done that and I don’t think we could do any more.”

Speaking on talkSPORT, he added: “It was an absolutely unbelievable day. It took me back to when Lewis started karting at eight years of age. The culmination of all of our dreams.

“I said to him there were no words. We were both just dumbfounded. Don’t forget we started off in a council house when Lewis was five or six years of age. We had no idea we’d end up here.

“I knew he was capable of greatness because when someone commits themselves and says ‘I’m going to do everything you say and this is what I want to be’, there are no limits, as long as you are dedicated and seek out your dreams,” added Anthony.