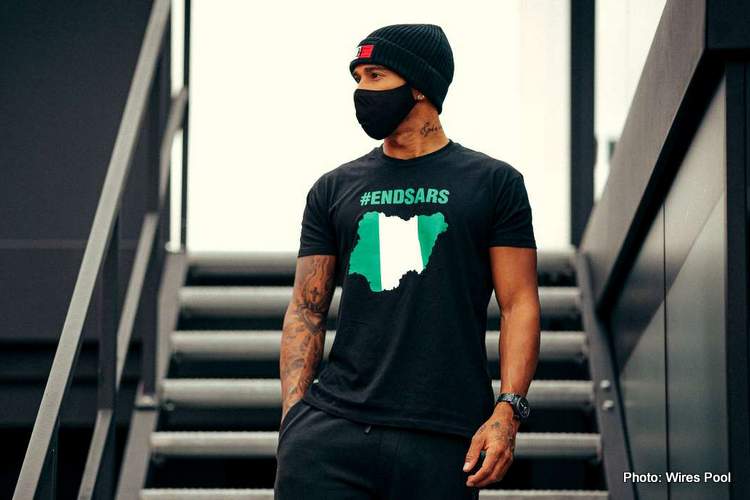 In the wake of the headline-grabbing feat of becoming Formula 1’s most successful driver in terms of victories, it should be noted that before he accomplished the feat on Sunday afternoon, Lewis Hamilton donned a T-shirt protesting against police violence in Nigeria for a pre-race television interview at the Portuguese Grand Prix on Sunday.

Nigerians have been demonstrating for weeks against a police unit, the Special Anti-Robbery Squad (SARS), which rights groups have for years accused of extortion, harassment, torture and murders.

“I’ve got to show this,” Hamilton, Formula 1’s only Black driver, told Sky Sports television as he revealed a green T-shirt with #EndSARS written on it at the end of the off-grid interview.

The Briton reverted to his usual ‘Black Lives Matter’ T-shirt for the officially-sanctioned pre-race anti-racism gesture on the starting grid.

Formula 1’s governing body last month set out new pre- and post-race rules for driver attire after Hamilton wore a T-shirt on the Tuscan Grand Prix grid with the words “Arrest the cops who killed Breonna Taylor” on the front.

Taylor, a Black medical worker, was killed by police officers who burst into her apartment in Louisville, Kentucky, in March.

“Lots of rules have been written for me over the years and that hasn’t stopped me,” Hamilton said when the new rules were announced.