Wolff: It’s everything Lewis puts into the sport, passion, energy 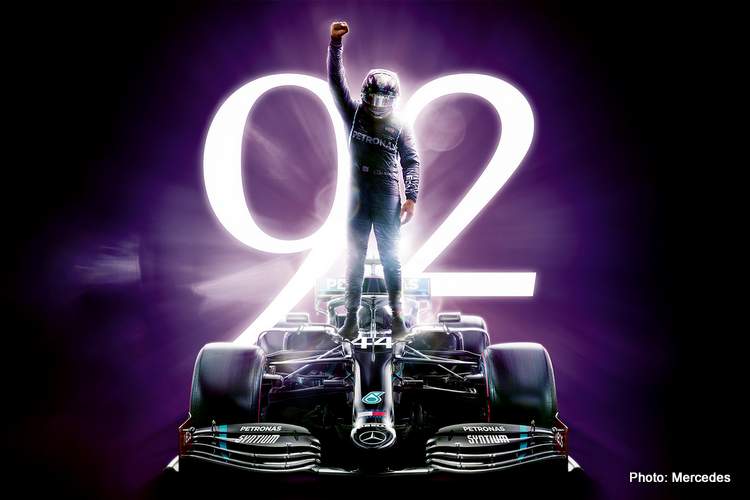 If Lewis Hamilton is the King of modern Formula 1, then his boss Toto Wolff is the King-maker, he and his fabulous Mercedes team – the mightiest in the sport’s history – have provided the great Englishman with a platform to showcase his genius and collect records.

Victory 92 from 262 Grand Prix starts for Lewis is a new all-time record. He is now the driver with the most wins at the pinnacle of the sport thanks to a team that have relentlessly provided him with the best cars of this generation.

After a period as a top team, fortunes faltered and Ken decided to sell up. Thus Tyrrell’s last F1 points were scored by Mika Salo at the 1997 Monaco Grand Prix. The final race for Tyrrell was the 1998 Japanese Grand Prix.

In 1998 the team became BAR; the Craig Pollock and Jacques Villeneuve venture that never got going despite big financing from British American Tobacco before being acquired by Honda and run as their works team also with disappointing results before it was offloaded to Ross Brawn and his one-hit-wonder Brawn GP team which took Jenson Button to the 2009 F1 title on a pittance.

Step up Toto Wolff and Niki Lauda who, in 2010, engineered Mercedes’ return back to the top flight, with the rebirth of the Silver Arrows led by F1 legend Michael Schumacher alongside young up-and-coming (at the time) Nico Roberg.

However, despite high expectations of the new force in the paddock, times were lean early on, until 2013 they signalled their intent when Niki lured Lewis away from McLaren and, a year later, with the advent of the 2014 turbo-hybrid generation the incredible legacy we are currently witnessing was spawned.

A wild start and a memorable ending 🍿

Wolff and his lieutenants have gone on to build this invincible winning machine spearheaded and built-around Lewis, combining to be a force seldom witnessed in sport, let alone motorsport, and thus the Austrian deserves the preface to the many words that will be written about his star driver’s achievement.

The first thing the Merc boss said to Lewis over the radio, as the 35-year-old crossed the line to make history. was: “Lewis, 92. 92.”

Afterwards, Wolff looked back on the driver they hired eight years ago, “92 race wins, who would have thought that when we embarked on the project in 2013? It’s almost a surreal number of wins.

“It’s absolute passion, energy, and everything that Lewis puts into the sport. The talent and the ability just stand out. I think what I’ve seen this year for the first time with Lewis is that he ramps up his weekends.

“There is a lot of reflection, a lot of learning, understanding the tyres for the race, and he was just sitting comfortably at the beginning during opening laps, then he just ramped it up and then had unbelievable pace. It’s been a very good day,” added the team principal.

Meanwhile, away from the track, and behind-the-scenes it is known Lewis is negotiating an extension to his contract, a matter that will no doubt be dealt with when he wraps up the 2020 title, which should happen before the season finale in Abu Dhabi in December.

As always no one knows anything about the matter except for Lewis and his boss, however, the issue of money is reportedly a sticking point as is the length of the new deal that would begin at the start of 2021. Lewis is reportedly on $40-million a year.

Asked about the status of negotiations and salary requirements for the record-breaking driver, Wolff joked, “It’s huge! We have to sell plenty of inventory just to come up with the money.”