Verstappen: Incredible 92 wins and I don’t think it stops there 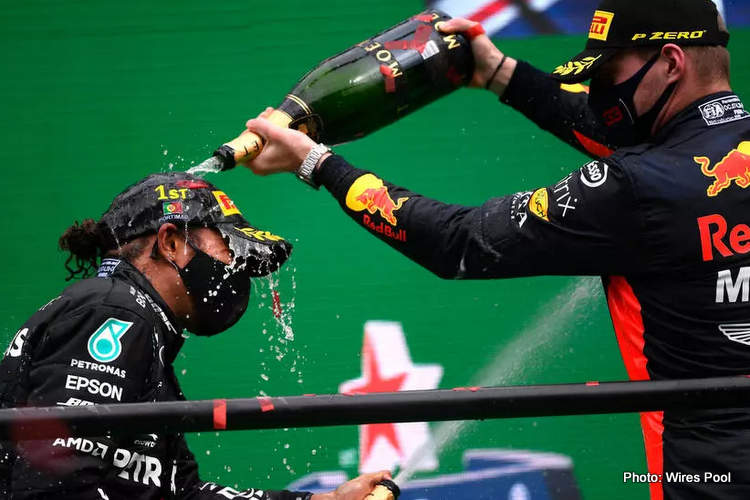 Max Verstappen is the not the kind of chap that flings praise around at will, but when asked about Lewis Hamilton’s record-breaking at the 2020 Portuguese Grand Prix, the young Dutchman verbalised his admiration for a driver he clearly respects.

On Sunday in Portimao, Lewis made history when he scored a dominant 92nd win in the top flight, surpassing Michael Schumacher’s elusive and long-standing record while taking a step closer to a seventh world title which will equal Schumi’s record tally.

When asked, during the post-race press conference,  for his thoughts on the Mercedes driver’s achievement, Max replied, “Lewis says he keeps pushing because he wants to set it very high, because… yeah, I have to work hard to try to get there!

“It’s amazing. What can you say? It’s just incredible. An incredible achievement. Ninety-two victories and I don’t think it stops there. It will go well over 100. He’s pushing me to go until I’m 40 years old, or something. It’s a good motivation as well.

“Nah, anyway, it’s incredible. It looks like or course he’s also going for his seven world titles, which is very impressive. Everybody knows he’s very quick but what has also been a very strong point is that he’s also very consistent and very rarely makes a mistake and that’s why I think also he got to this number so quick. Yeah. It’s just very impressive

To which the World Champ, sat beside him in the post-race press conference, acknowledged with, “Thank you mate.”

If, at 35, Lewis is the King of Formula 1, Max – a dozen years his junior – is the heir apparent but, unlike Lewis, without a winning package at his disposal he may end up being the guy that stood on the podium many times but on the two wrong steps too often.

Asked if this potential reality was a source of frustration, Max replied, “You just have to accept the situation you’re in because otherwise, you would become a very frustrated person if you don’t accept it, so that’s what I did.

“I come to a Grand Prix, I always try to get the best out of it and it’s a good motivation. I can enjoy third or second if I know that I push myself to the limit, I push the car to the limit and I know that the team did everything they could.

“Again, I think today the guys did a few amazing pit stops again. Stuff like that motivates me but also motivates them. I take my enjoyment out of that. And in the end of the day, yeah, I mean everybody loves winning, that’s why we are, but if it’s not possible, it’s not possible.

“I mean at the end of the day, I don’t think that when I’m 40 or 50 years old I care a lot about those kinds of things. I just want to look back when I’m at that stage when I’m 40 or 50 and I look at myself in the mirror and say did you get the most out of yourself?

“If you can say yes, then I’m happy about that because if that means you win seven titles or whatever or zero, you need a bit of luck for that as well, to be at the right team at the right time.

“Sometimes it doesn’t work out like that but we’ll see. I still have a few years ahead of me, so hopefully, things will change,” added the Dutchman who has nine wins in 114 F1 starts.

At the same point in his career, Hamilton had 21 wins on his CV all with McLaren and had yet to start his legendary winning spree with Mercedes.