Hamilton: My Dad is here which is amazing 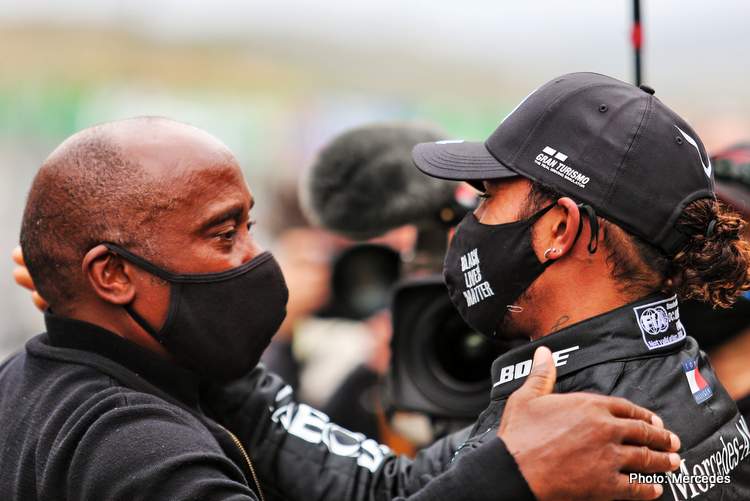 It was a touching moment as Lewis Hamilton and his father Anthony sought one another out for a power-hug, in the frenzy of parc ferme, after the Mercedes driver powered to a majestic win at the 2020 Portuguese Grand Prix on Sunday.

In doing so he became Formula 1’s most succesful driver in terms of victories and took a step closer to becoming a seven-time world champion after a famous afternoon in the Algarve. Everyone will remember what they were doing the day Lewis racked up number 92.

His dad famously juggled jobs to provide his prodigious son with a racing kart, leaving the rest was to Lewis’ talent to do the talking on track, which he did with aplomb and by catching the eye of McLaren supremo (at the time) Ron Dennis and the rest, as they say, is history.

Fast forward two decades and Lewis has surpassed Michael Schumacher’s once unattainable record of Grand Prix victories, on Sunday 25 October 2020 in Portimao, he made it 92 wins in 262 starts in the top flight which began with his debut at the 2007 Australian Grand Prix.

His drive today was out of the top drawer. Perhaps secretly incensed by the drubbing he received from his teammate Valtteri Bottas in qualifying for the Eifel Grand Prix at the Nurburgring three Saturdays ago. That quarter second deficit must have irked.

In Portugal, Valtteri had the momentum from day one and topped all practice sessions but in qualifying, Lewis engineered an edge by going for two-lap blast that earned him pole position number 97.

In the race, Lewis allowed the #77 to set the pace in the early stages as they dealt with pesky Carlos Sainz  surprised everyone by leading on merit early on when the McLaren with softs performed (briefly!) like a an orange Merc. The crowd roared their approval, but it was short-lived cameo.

With Sainz out of the way by lap eight, Lewis stalked Valtteri, keeping the other black car within two seconds, well within striking distance. That came after after a flurry of fastest laps, the #44 bobbing-and-weaving under the rear wing of the sister car before swooping past on lap 20.

By lap 30 Lewis was over seven seconds ahead of his teammate in second place; by lap 40 the gap was just north of ten seconds. At the end of the 66-lap race the gap was 25 seconds. It was a demolishen job!

Speaking to Martin Brundle in parc ferme after his achievement, and a hearty bear hug from his proud father, an emotional Lewis said, “My dad is here which is amazing, my step-mum Linda is here, Roscoe too. I feel very blessed. It’s going to take some time for it to sink in.

“I owe these 92 wins to the team here and back and the factory for their tremendous work. They are continuously innovating and pushing the barrier, even higher every year.

“It’s been such a privilege working with them and I am so grateful for all the moments. The reliability has been incredible thanks to the Mercedes team, Petronas and all our partners who are continuously pushing. No one is sitting back on the success, everyone is pushing and pushing and pushing.

“That’s the most incredible thing to be surrounded by: it inspires you, that collaboration, and there’s nothing quite like it.

“I could only ever have dreamed of being where I am today. I didn’t have a crystal ball when I chose to come to this team and partner with these great people. What I can tell you is that I am trying to make the most of it every single day.

“Everything that we do together, we are all rowing in the same direction and that’s why you’re seeing the success that we’re having,” added the history-maker.

Lewis leaves Portimao for Imola next weekend, with a 77 points lead over his teammate Valtteri with five rounds remaining. Next Sunday he will be looking to do the same as he did today, either way they might as well give him the 2020 world champ’s crown now.

As for more records, win 100 will happen only next year as there are not enough races this season for him to achieve that feat but he could claim his 100th pole position after the 97th one he claimed on Saturday while his Schumi-equalling seventh F1 title is a now a mere formality.

💬 "It’s going to take some time for it to sink in. I can’t find the words at the moment…"

Debriefing a historic day for Lewis and the Team in Portugal 👇