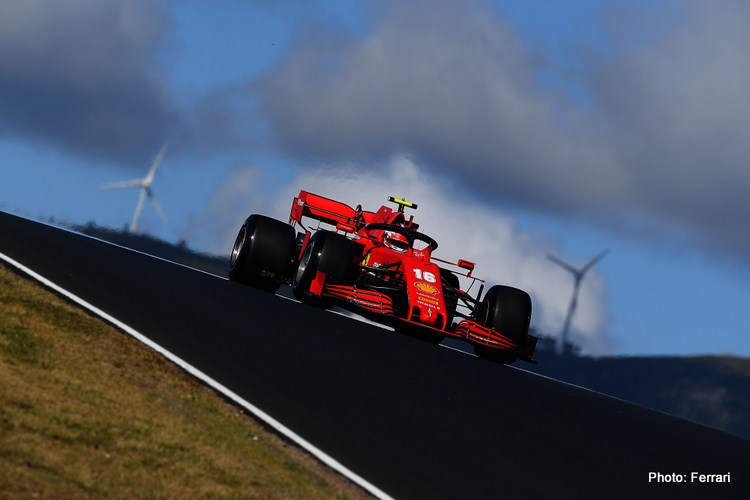 Ferrari’s Charles Leclerc says his performance in Friday practice for the Portuguese Grand Prix has him cautiously optimistic about the latest round of upgrades for his car.

The third race in a row the Scuderia has brought improvements for the SF1000, Leclerc was able to finish fourth in both sessions, with his FP2 time 0.898 seconds behind the leading effort of Mercedes’ Valtteri Bottas.

And while it’s certainly early days, Leclerc suggested it was a sign his team had indeed made a step forward.

“Yeah it looked quite good today,” he said. “Let’s wait and see – we haven’t done much high fuel running with normal tyres; we did some with proto [prototype Pirelli] tyres. This was our weakness at the last race so it will be a bit of a surprise on Sunday to see where we will be, but on quali pace, it looks quite promising.”

At the same time, two red flags in FP2 prevented some drivers from setting indicative lap times, with Leclerc admitting he couldn’t place his team precisely in the pecking-order, although he stood by his assessment of the car.

“It’s a difficult question. I don’t really know where we are but it’s definitely promising.

“The car is a bit difficult to drive at the moment, but it looks the same for everyone in the paddock, so I guess it will be up to the guy that does the best lap without doing any mistakes in quali and will try to extract the maximum out of the car.”

Regardless of its true performance, Leclerc said he thoroughly enjoyed taking to the circuit for the first time in a F1 car.

“It is extremely slippery – the rear of the car is moving everywhere – but that makes it even better, I think.