Hamilton: I can’t tell you how hard that was 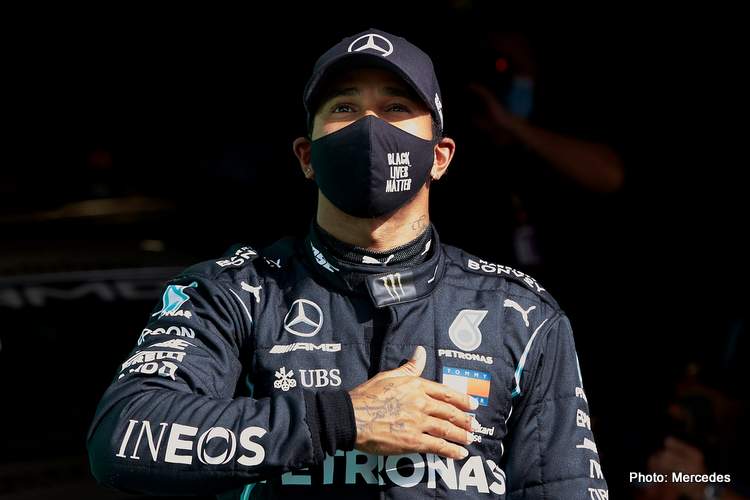 Lewis Hamilton was made to work hard for his 97th pole position, the Mercedes driver was pushed all the way by teammate Valtteri Bottas during qualifying for the Portguese Grand Prix but in the end, had a tenth to spare in a sensational final lap snatch.

Up until that point, Valtteri appeared to have the higher ground after clean-sweeping all three free practice sessions with his pace, transforming that into qualy and thus forcing Lewis to up his ante in that final run-in qualifying.

Two weeks earlier the Finn was mega in Russia, taking pole that Saturday by a quarter of a second. It was a rare and proper thumping thus Lewis needed to make it count today; two defeats in a row would have been hard to stomach.

The World Champion’s response was typical, he dug deepest when it mattered, delivered two laps in his final Q3 run – the last one a stonker – while Valtteri believed one stab at it would be good enough, it wasn’t.

Lewis said after his month pole of the year, “I can’t tell you how hard that was today – we’ve got a great car, but you have to drive the nuts off it to pull out a lap and Valtteri has just been so quick here this weekend!

“I’ve been digging and digging and trying to find that extra time. They communicated well with us and gave us the option of what to do at the end – I chose to do three laps to give a chance at beating his time and he chose to do one. I thought that might give me an opportunity and it worked out, getting better and better on the final lap.

“This is a hardcore circuit, with places where you can’t see where you’re going because you’re just looking at the sky, so there are no references for braking points for example. It’s among the most challenging circuits I’ve been to, especially with this new surface that makes it hard to get the tyres switched on and working on both axles.

“It’s a big thank you to the team for the work this weekend, and to the fans who were able to come out today – it’s great to see their flags out there on track,” added Lewis who will set his sights on a record-breaking 92nd Grand Prix victory on Sunday.