Bottas: I should have gone for two laps as well 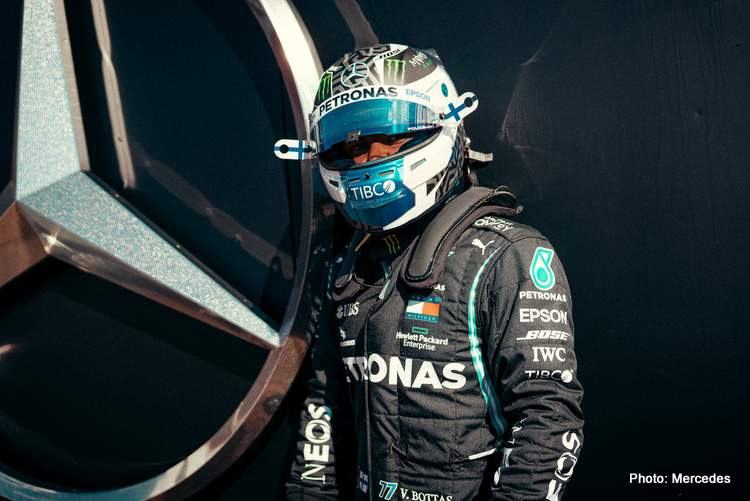 Make no mistake Valtteri Bottas is a very fast driver, there is no doubt about that. Anyone who can out-qualify Lewis Hamilton by a quarter of a second – as the Finn did in Russia two weeks ago – is special.

And credit to the Mercedes driver for pushing Lewis to continue to dig even deeper, as he has done in the build-up to Sunday’s Portuguese Grand Prix. Valtteri owned the free practice sessions, topping all of them and early in qualifying looked a fair bet for another pole.

But a call to make only one run on his final fling in Q3 around the gorgeously challenging Portimao rollercoaster may have cost him his 15th top spot start in Formula 1. And of course, Lewis raising the bar yet again men’s the #77 car will line up second on the grid.

Valtteri said in parc ferme, “I went for one lap, it was my decision as it worked well in Q2 but it might be that doing the two timed laps like Lewis was better. The lap was good. Ultimately I should have gone for two laps as well.”

And added in the Mercedes team report, “That was a strong session for me until the final run. It was a question of one timed lap or three timed laps of fuel in the car. It’s always a balance: with one lap, you carry less fuel weight but might have a challenge with the warm-up of the tyre; that’s what I went for as it had worked for me in Q2.

“It has been tricky to get clean laps this weekend and the final one for me was decent but not perfect – that’s the challenge of a track and a surface like this.

“So of course, a little disappointing not to be on pole after topping the times most of the weekend, but I will be fighting for the win from P2 tomorrow,” added Valtteri who is the only driver who can seriously challenge his Mercedes teammate for this year’s title.