Verstappen: Is this f*cking guy blind? 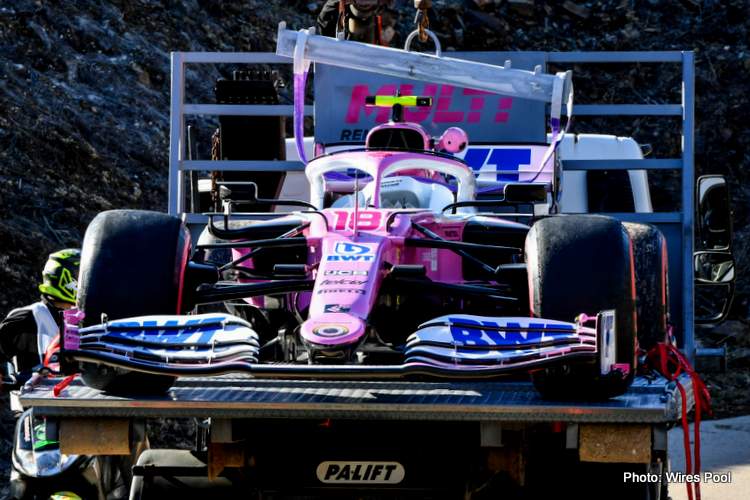 “Is this f*cking guy blind? What the f*ck is wrong with him?” yelled a fuming Max Verstappen as his Red Bull toe-poked the Racing Point of Lance Stroll into the kitty litter during the second free practice session of the 2020 Portuguese Grand Prix weekend.

The collision has emerged as the biggest talking point on day one at the challenging Portimao circuit which caught out most drivers as they explored the edges of performance on a layout many had never driven on in real life.

Perhaps some have in the sim world, and indeed the scene was straight out of the F1 2020 game on chaotic multiplayer lobby. This was practice afterall.

Stewards summoned the lads to the ‘office’ and later declared that neither of the two drivers was “wholly or predominantly at fault”.

The report added: “Stroll was on a fast lap and was allowed to pass by Verstappen on the lap preceding the incident.

“Given the information from his team and usual practice, Verstappen assumed that Stroll would back off for the next lap and moved to overtake along the main straight.

“However, Stroll was instructed by his team to go for a second flying lap. Stroll assumed that Verstappen would have backed off to gain a gap between them, also in line with usual practice, and so was not looking for the overtaking Verstappen.

“The drivers agreed in the hearing that the incident was the result of a misunderstanding between them and that with hindsight, both could have contributed to avoid the incident.”

Later, Max explained, “I was so surprised, he just turned in… I was coming up to him! I don’t know where I have to go, I was starting my lap and he had just finished his lap… so we’ll see what happens. It’s Practice 2 and it’s just a shame that we touched and it was just very unnecessary. It’s just silly.”

Red Bull team boss Christian Horner backed his driver, “You’ve got to go back to the previous lap. Lance has got to that last corner, Max has let him go because he wants to take a tow and he’s assuming that Lance was finishing a lap. So he let him past, tucked up behind him, taking the advantage of the tow, assuming he’s going to back out because he knows he’s there and [Max] is up the inside.

“Obviously Lance for whatever reason hasn’t seen him, has committed to the corner and turned in. Both of them were expecting the other to back off. But if that were a race, Max would have been deemed to be up the inside so therefore the car on the outside should have given way.

“If I’m absolutely honest, you can look at it and say both had a role to play. Max has assumed Lance was going to back out, while Lance may not have even been aware Max was there. Both sides are going to argue their case but you probably have to say it’s a 50-50 and that’s it,” added Horner.

Sky F1 pundit Johnny Herbert observed, “To me, Max was already compromised because he was off-line, he was in the middle of the track. So his lap is going to be destroyed anyway.

“I don’t see why Lance had to pull out of it. He’s more than right to stick to his racing line because he was on a fast lap as well. So for me, Max should have pulled out sooner.”

Colleague Paul di Resta ventured, Paul Di Resta: “I would probably say Stroll should have given Max a little bit more space on the inside – because there wasn’t a car width there. But in a practice session, I don’t know how the stewards will look at that.

“In a race, I don’t think there would be a penalty on Max’s side there. But in a practice session, both parties have to take more care. It’s not a race. At the end of the day, what’s the big deal in Max backing out of it, or Lance letting him through. Both of them have that responsibility.”

Over at the Beeb, Jonathan Palmer slammed both drivers, “It is pretty moronic from both of them. Stroll is at least on the racing line and would’ve assumed Verstappen would back out and Max hasn’t.

“Verstappen is fundamentally the aggressor but for me it is so petulant from both of them to crash in free practice,” added the former Renault F1 driver.