Hamilton: Do I want to continue for three years? 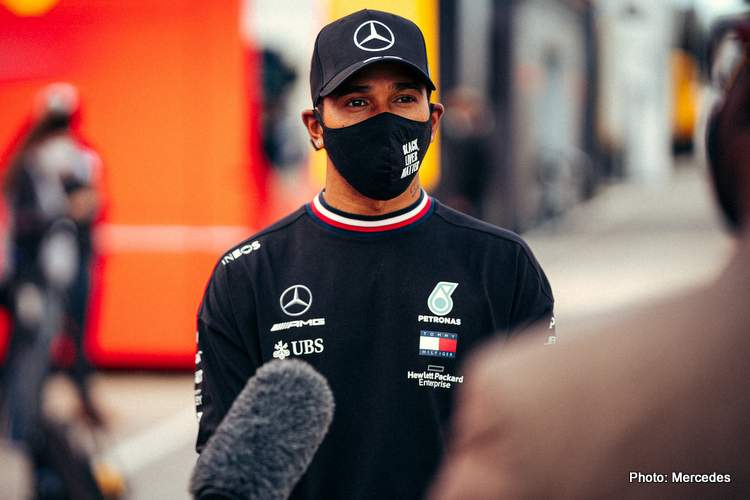 Lewis Hamilton’s victory at the Eifel Grand Prix, twinned with retirement for Mercedes teammate Valtteri Bottas, has put him 69 points clear with only six races remaining, and a seventh title is not far around the corner.

Next year, the Briton will be going for a record-breaking eighth, but he and team boss Toto Wolff have still to sit down to discuss a new contract, and both are still being coy about it in public.

There is also the question of Wolff’s future – he, too, is out of contract.

Lewis told PA on Thursday that a new deal was “probably” a formality” but that his priority was to settle the championship first, “I do want to stay, and I think when we do sit down, normally we plan, it’s been three-year periods, but of course, we’re in a different time.

“Do I want to continue for three years? – is also a question – there are many, many questions still to be answered, and we’re also going into a new era of car in 2022. It kind of excites me what could happen in 2022 in terms of what the cars are like.

“I think if you look short term, you could say there are going to be companies and businesses that are going under during this time. Mercedes are, I would say, on the climb back. They’re now in a much better place, but everyone has had a big hit this year,” he added.

The bottom line is that Lewis will stay, but will probably have to take a pay cut because of the global financial realities, and Wolff will remain the most senior figure in the F1 team, but may not be called team principal and may not attend as many races.

Lewis has often been criticised for his jet-set lifestyle beyond Formula 1, he addressed the issue during the interview, “I know I am given this playboy kind of image which is not me,” said Hamilton, who split from his last-known girlfriend, Nicole Scherzinger in 2015.

“If you were to go home to see me with my family you would know my core values. Over the years, people have assumed many things in terms of how my lifestyle is because I go to different events and I have a life and interests out of the sport.

“But people take for granted the time I allow myself to be focused on being the best I can be, physically in the right shape and also mentally, too. I never do anything that will get in the way or hinder that.

“Only I know how far or how thinly I can stretch myself, and I have managed to strike a decent balance.”

Hamilton has won seven of the 11 races staged during this coronavirus disturbed campaign.

On the evidence of first practice in Portugal on Friday, only team-mate Bottas – who finished ahead of Hamilton in the opening running – will stand in his way of making history.

Hamilton has won five of the past six championships against the backdrop of a hectic off-track agenda, but he has spent much of this year in either his motorhome at an F1 track or his Monte Carlo apartment as a result of the pandemic.

Hamilton added: “The other years have been massively rushed with a lot going on, running from one place to another, flying from London to New York, New York to Singapore, arriving for the 2018 Singapore Grand Prix, and doing the best qualifying lap I have ever done. I have continuously proved people’s theories wrong.

“However, this year has been different. I have done hardly any travelling – which has been quite pleasant.

“I have been at home longer than I have ever been in my entire life and it gives you time to train when you want. There are no excuses for missing sessions.

“The positive this year is that I have been able to have the time off from the things that I don’t want to do. I have not been pulled left, right and centre. There are commitments I have which I don’t want to do but it is part of the machine we are involved in. A lot of those things have disappeared.

“The core of me is motor racing and that is what I have always loved doing. It is almost like karting, where I would go to school and then go racing every weekend. Now it is a bit like those original days.” mused the World Champion. (With input from AP and PA)