Sainz: There’s a lot of things not going my way this year 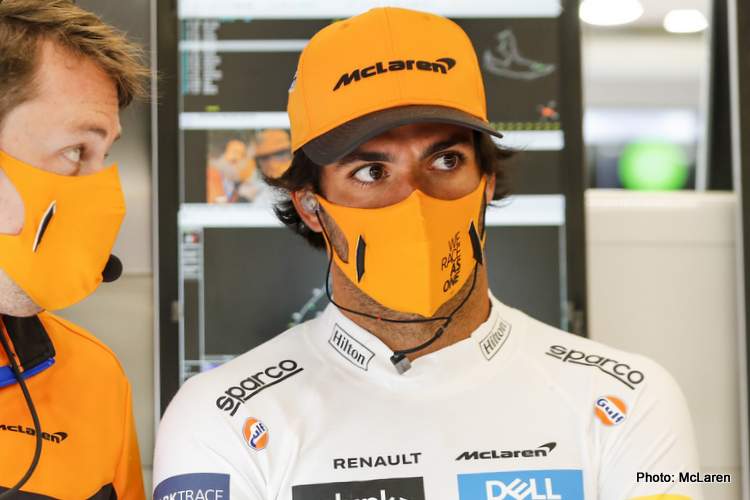 McLaren’s Carlos Sainz admits he is frustrated with the results of his 2020 Formula 1 season so far, suggesting he should have “30-40 points more” than he currently does.

Sitting 11th in the driver’s championship with 51 points, Sainz is 14 points behind teammate Lando Norris in sixth.

Indeed, having narrowly missed-out on a victory in the Italian Grand Prix to AlphaTauri’s Pierre Gasly, it might seem like Sainz should be higher, but the Spaniard has also suffered from several race-altering incidents.

At the British Grand Prix, Sainz was running in fourth until a tyre failure caused him to pit and fall out of the points on the last lap. A week later at Silverstone again, a wheel-gun failed on his pitstop. In Belgium he failed to start the race (from P7) with a power unit issue. At the Tuscan GP he was taken-out in a safety-car restart pile-up, and his Russian Grand Prix ended early after he ran off-track and clipped the barrier whilst navigating the bollards to rejoin.

“It’s annoying, you guys know how competitive I am and how I consider myself to be doing actually a decent year and a good year in F1 – if it wasn’t for the Russia mistake – I think I’m doing my best year in F1 to today and performing at a very high level,” he said, as reported by motorsportweek.com.

“I feel I’m on top of my game and somehow you look at the standings and I’m 11th in the championship. I know there’s a lot of things not going my way this year, it’s been a weird and very strange year for me.

“I’ve never had a chance to get the momentum and get consecutive results, in a short season, 17 races. It’s not over yet, there’s six races left, I’ll try and finish on a strong note.

“It is annoying yes, I find it particularly annoying, as I think I should have at least 30-40 points more than what I have.”

Finishing sixth in last year’s driver’s championship, Sainz was the best of the midfield drivers in a season that ultimately earned him a 2021 race seat with Ferrari. With six races remaining, he says he still aims to better that effort and haul-in fourth-placed Daniel Ricciardo, who is 27 points ahead, on 78.

“I am a bit far away, [but the margin is] a normal race win. Which for us when we are fighting for top sixes a race win is eight points so you could argue I am three races behind my direct competitors, two or three ‘race wins’ away from them.

“It doesn’t mean during the last races I don’t want to do well as I want to finish off on a high [with McLaren] and score a lot of points.”