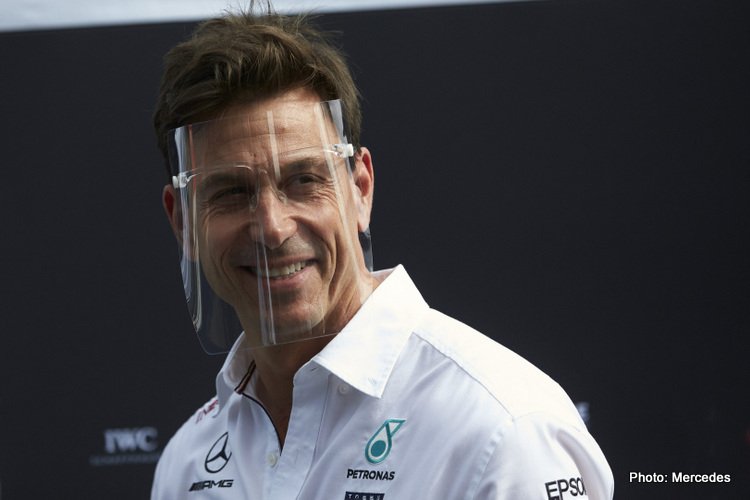 Mercedes team principal Toto Wolff believes that Formula 1 has not done a good enough job of telling the story of its hybrid power-units.

Since the start of the 2014 season the sport has used 1.6 litre turbocharged hybrids power-units, rather than the 2.4 litre naturally aspirated V8 engines that had been in place previously.

F1 is planning on moving to a new power-unit formula from 2026 onwards and aims to become carbon neutral by 2030.

Wolff said that the sport was a good showcase for hybrid technology, but explained that it does not tell the story as well as it could.

“I believe we are not telling the hybrid story well enough,” Wolff said.

“With 50% thermal efficiency, and the complexity and technology that exists in these cars with the energy recovery with kinetic energy or exhaust gases, the batteries that we’re using and the technology within them, we are a pretty good showcase for hybrid technology.

“The next generation of power units, whenever they come, will lend even more to sustainable energy recovery and sustainable propulsion systems in the future.

“We know now that we have to look at the costs. We don’t want to make the same mistake that we are purely engineering driven, like with these power units.

“But make sure they are something innovative, sustainable, powerful, fuel efficient, and at a reasonable price.”

The supply of power-units in F1 has come under increased scrutiny recently following the announcement that Honda, who currently power Red Bull and Alpha Tauri, would be leaving the sport at the end of the 2021 season.

As to why Honda had decided to leave, Red Bull team principal Christian Horner suggested that the cost of developing the hybrid power-units was prohibitive for a number of manufacturers.

“When you look at the costs involved in the engine supply, they are enormous, and that is why Formula 1 has failed in its attempt to attract new engine suppliers and new manufacturers into the sport,” said Horner.

“It brings into real focus those costs, those cost drivers through the regulations. Honda’s withdrawal is a real shame for Formula 1, but also a real wake-up call.”