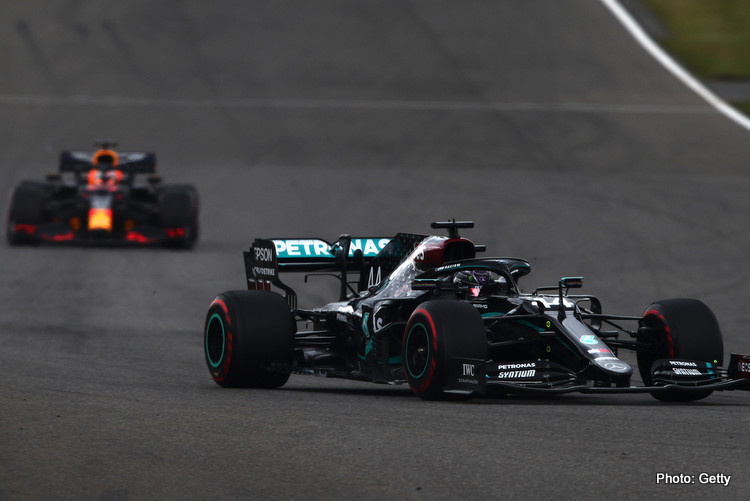 Formula 1’s ban on engine-mode changes between qualifying and the race has brought Red Bull closer to Mercedes, according to the latter’s trackside engineering director Andrew Shovlin.

Unanimously agreed to have the best chassis and engine on the grid, Mercedes have long benefitted from the strength of their qualifying-specific ‘party-mode’, only to see the ace taken out of their sleeve when the FIA made the decision to limit engine modes prior to the Italian Grand Prix.

And while Mercedes have won three of the four races since the ban, Shovlin suggests his team has had to work harder to maintain their advantage.

“Red Bull are closer to us,” he told the F1 Nation podcast. “In qualifying [for the Eifel Grand Prix], Lewis [Hamilton] and Max [Verstappen] both did their best times in Q2, and if you look at every one’s best times, it’s very, very close at the front.

“I think Valtteri [Bottas] just put together a brilliant lap when it actually counted. They’ve been closing on us over the course of the year.”

Indeed, although the team managed another front-row lockout at the Nurburgring, Verstappen was only 0.037 seconds off of Hamilton in P2, and Shovlin expects the combination of the engine-mode ban and Red Bull’s traditional late-season surge to produce similar battles moving forward.

“Definitely the changes in the engine modes to stop the qualifying modes have brought them a step closer. I think they are developing quicker than we are at the moment and we’ve seen that progressively.

“But to be honest, we’ve seen that in most of the recent years. They tend to not start as strongly as we do, but I can’t really think of a year recently where they’ve not been with us by the end.

“If we see that trend continue then the remaining races are going to get tougher and it will be harder to try and keep getting the cars on pole on Saturday and winning on a Sunday.”