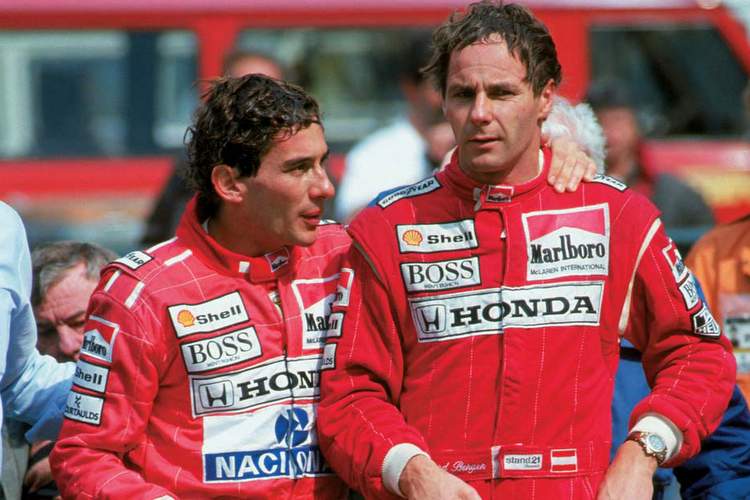 Ayrton Senna is still the greatest Formula 1 driver of all-time, according to his former teammate Gerhard Berger.

Berger, whose F1 career ran from 1984-1997 with stints at Ferrari, McLaren and Benetton, was asked by Speedweek for his opinion on who was better between F1’s race-win record-holders, Michael Schumacher or Lewis Hamilton, to which he answered: “Ayrton Senna”.

A teammate of Senna’s from 1990-92 at McLaren, Berger explained that while he considers Hamilton and Schumacher “giants” of the sport, the Brazilian would be on-par in the record books were it not for his tragic death at the 1994 San Marino Grand Prix.

“For me it’s still Ayrton. He died early, but until then he had all records in hand,” he said. “He also sat in the car that was the car to beat for the years that followed. I think Ayrton would have become world champion very often and the count would have been different. I’ve seen all three very close, some of them wheel-to-wheel. He’s the best racing driver I’ve seen.”

Having joined two-time defending constructor’s champions Williams at the start of the 1994 season, Senna was indeed positioned in a team that would go on to win three of the next four titles, with driver’s championships following for Damon Hill and Jacques Villeneuve in 1996 and ’97 respectively.

Nevertheless, the record books at this point belong almost exclusively to Hamilton and Schumacher, with Berger indicating he finds it hard to separate the two, even if part of him wishes he could.

“I would also have liked Michael to remain the most successful racing driver in history for a long time, simply because of his fate, which is so dramatic that you almost cry every time you think about it,” he admitted.

“Hamilton is an exceptional racing driver, he has proven countless times that he deserves this title. This is a battle between two giants that we will discuss for years.

“We are at the top where you cannot say who is the better. You couldn’t even tell if you had both fit on the grid in the same car. These are two such giants that you have to leave it at that, that they have shaped our sport the most. “