Abiteboul: Podium is proof that Renault has progressed 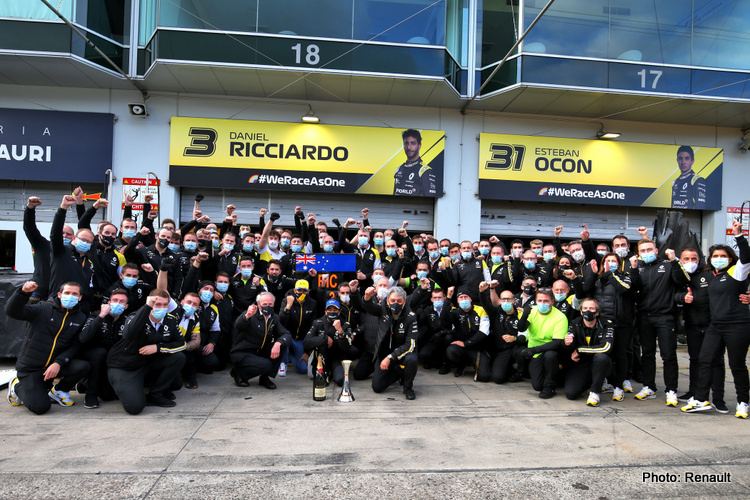 Renault’s podium at the Eifel Grand Prix is proof the team is making strides, even if it has a ways to go to get such results under ‘normal circumstances’, says Cyril Abiteboul.

The first podium for the Enstone-based outfit since 2015 and first under the Renault name since 2010, Daniel Ricciardo’s P3 was understandably celebrated like a victory by the team, which has copped its fair-share of criticism since returning to the sport as a constructor in 2016.

And while Abiteboul admits the RS20 is still not a car capable of regular top-threes, recent improvements have made it more capable of seizing opportunities like the power unit failure Valtteri Bottas suffered on Sunday than it was earlier in the 2020 season.

“I think the timing is just a fact that the team has progressed,” Abiteboul said afterwards. “It’s very visible, since a few races. We understand the car better, the set-up works better… frankly we were a bit worried here because this is the first time we were coming to a track that is extra high downforce and here also it [the car] is working.

“Clearly our car is not good for a podium under absolutely normal circumstance, but what’s good is that when it happens, when there is a lot opportunity, [we are] able to nail it down.”

Expanding further, the Frenchman said he hoped the result would give his team personnel the boost they need to turn into a race-winning outfit.

“You know the amount of work that goes into a programme like this one, and I’m not just talking about me, I’m talking about the 1000 more team members that compose this team. They need a bit of emotion, they need some energy.

“Keep in mind that we grew massively. Most of the people who have joined the team are young people, who have never experienced the emotion of winning, or even being on the podium.

“So we need to take that. And we need to make them addicts to success for them to develop more, to build more success.

“And, yes, right now, we need a bit of circumstance to be on that podium. But the focus will be from Monday onwards first to understand the problems that we’ve had.”