The braking point: Hamilton, Schumacher and the GOAT debate 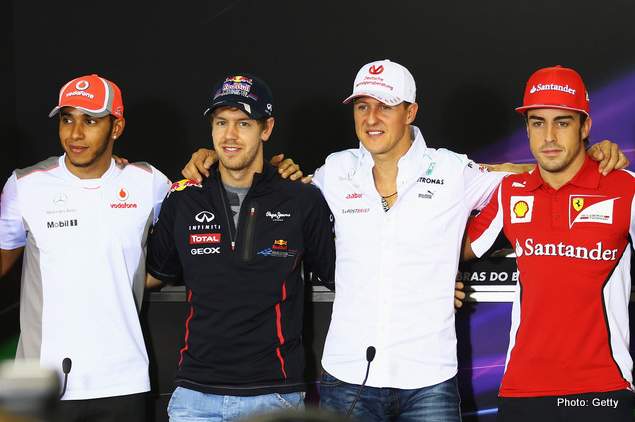 Greatest of all time debates are tiring and unwinnable in all sports, not just Formula 1.

The two sides set out their camps and vehemently refute the arguments thrown at them. The cases for each side are drawn up and incidents from throughout the career of the two sportsmen involved are analysed forensically in order to make the comparison.

In Formula 1, this process is even muddier and often just as vitriolic. The nature of the sport means that some of the best drivers ever had an advantage over their rivals due to the car they drove. But the level to which these advantages have existed is tough to determine as it varied from race to race and was impacted by numerous factors.

However, since Lewis Hamilton equalled Michael Schumacher’s record of 91 wins at the Eifel Grand Prix on Sunday, these discussions are nonetheless expected to intensify.

An argument that is often used against and in favour of Schumacher is the additional time he spent testing at Fiorano while driving for Ferrari. Some see this is an example of an unfair advantage he held over the rest of the drivers on the grid, while others cite it as part of his winning mentality and drive that made him so good. Similarly, his ruthless style of wheel to wheel racing is used to both praise and beat him with.

With Hamilton, the argument that is most commonly used against him is that by driving a Mercedes, he has simply been handed six of his seven titles without any real competition. Without getting into this debate too much, I do not think this holds too much water when comparing him to many of the greats that have come before him, especially given the fact that car advantages have always existed. It is also unfair in that it ignores the obvious levels of talent he possesses and the evident speed and race craft he has shown since his first Grand Prix at Albert Park in 2007.

But this article is not intended to throw weight behind Hamilton as the best ever. It is simply to say that these debates are pointless.

Greatness is largely subjective, with each observer holding different standards for what they consider to be great. Gilles Villeneuve recorded just six wins and never secured a world championship before his untimely death at the 1982 Belgian Grand Prix, yet he is widely regarded as one of the best drivers ever. Others look at trophies and championships as more important criteria.

The fact is we will never be able to see all the greats compete in the same machinery in their respective primes. But I hardly consider this to be a bad thing. Each driver played their role in the development and history of the sport and that place in history should be respected. From the early days, to improved safety, to global expansion, to hybrid technology, these competitors forged their careers in entirely different eras against entirely different backdrops. To compare them when they drove in such different conditions is not only impossible, but it is unfair.

Therefore, we have to accept that luck is a part of it and landing in the right car at the right time is vital. No one is arguing that Hamilton would have reached 91 wins in a spec series. But neither would Schumacher. Ultimately the comparison is a fools errand.

Instead, why not enjoy the greats for their unique qualities and the drama, skill and dedication they bring to the sport, for the pursuit of a definitive ranking of the greats is a futile one.