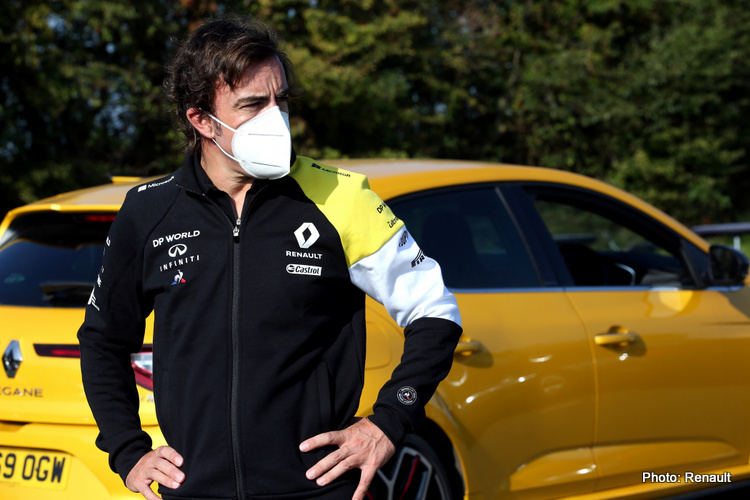 Fernando Alonso will make his return to a Formula 1 cockpit when he drives the Renault RS20 in a filming day at the Circuit de Barcelona-Catalunya on Tuesday.

A two-time driver’s champion, will end a two-year hiatus to join the Enstone outfit for the 2021 season.

Last driving a F1 car at the 2018 Abu Dhabi Grand Prix with McLaren, the filming day will be an opportunity for the Spaniard to acclimatise himself to cars that by his own admission, have changed considerably.

“Returning behind the wheel is going to be an amazing feeling,” he said in a video released on Renault’s social media. “You know, after two years not driving a Formula 1 [car], I think it’s going to be like a new beginning; getting surprised about the speed of the car, the braking performance, the corner speed… you know, a lot of things that will surprise me once again and I’m looking forward to it.”

Additionally, the Spanish circuit holds a special place in Alonso’s memory, given it was where he got his start in F1 with the same team – then known as Benetton, 20 years ago.

“It’s very special to be back in Barcelona, I remember my first test with Benetton in the year 2000 was in Barcelona and it’s going to be in the same circuit, 20 years after that first test.

“It’s going to be one of the last opportunities with a car named after the Renault brand because next year it’s going to change so I feel really privileged and I’m looking forward to it, very excited.”

And while Alonso will only be limited to 100 kilometres of running, he promises to make each of them count.

” It’s only 100 kilometers, it’s a filming day so we will try to maximise those laps and try to get some images and some filming.

“I know that I will learn and I will discover a lot of things during those laps, I will take it with a very open approach and try to learn as much as possible in every kilometre.”