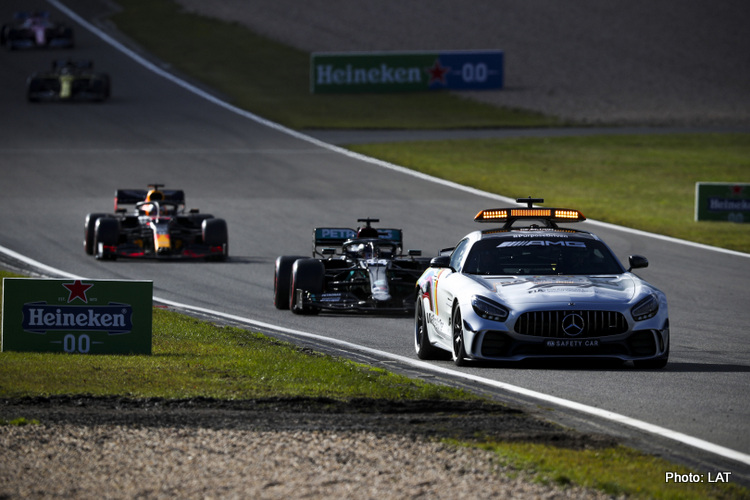 Formula 1 race director Michael Masi has backed his decision to call out the safety car during the Eifel Grand Prix after Lando Norris’ car suffered an issue.

Bringing out the safety car at that stage neutralised the battle for the third spot on the podium between Daniel Ricciardo and Sergio Perez, despite the fact that Norris’ car was parked up next to a marshal’s post.

The cars then spent around six laps behind the safety car, which led to questions being asked about whether Masi could have utilised a Virtual Safety Car as he did earlier in the race when George Russell was forced to retire.

“Lando’s car had some smoke and fire, so that was one point,” Masi said. “The other was, at first glance, we weren’t confident that the car could actually be recovered into the opening that was there, due to the tightness of it.

“So rather than having to react along the way, it was determined to go for a safety car, that way it could be dealt with all at once immediately. It was the safest action in that circumstance.”

Not only did bringing out the safety car nullify battles throughout the field, but it also lead to criticism over team radio from Lewis Hamilton and Max Verstappen, who were struggling to maintain tyre temperature.

Asked after the race, the Dutchman said the decision made things more dangerous, “I just didn’t understand why the safety car was out for so long.

“The car was cleared. I understand they want to bunch up the field, but it’s pretty dangerous with these cars when the tyres are so cold,” added Verstappen.