Hamilton: I’m not done yet 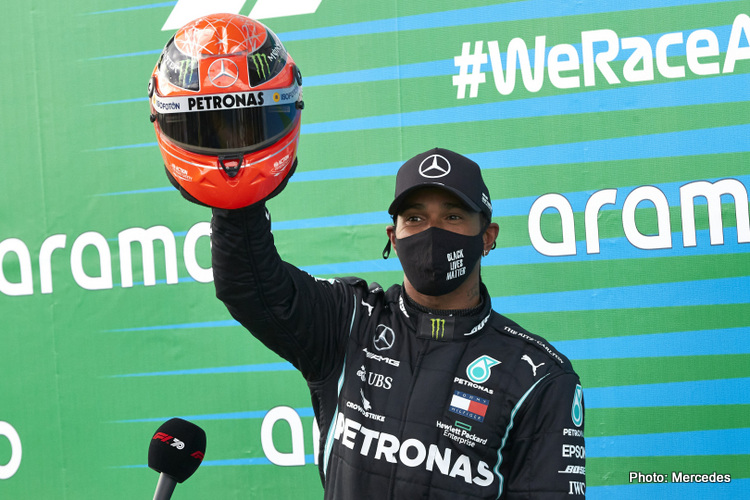 Lewis Hamilton says that he is “not done yet” after equalling Michael Schumacher’s record of 91 race victories in Formula 1.

The six-time world champion moved 69 points ahead in the standings with six races remaining after his seventh win of the season at the Eifel Grand Prix at the Nurburgring, passing teammate Valtteri Bottas on lap 13 for the lead.

Having equalled the win record, Hamilton said it is “going to be difficult to let it go” when he retires from the sport, but insisted he still has plenty to give as he chases more records.

“I think for me, like everyone here, I love doing what I do. I love the challenge,” he said.

“It is so hard and I think I would be willing to say there’s potentially not enough respect that is probably given to all these drivers who dedicate their lives in terms of preparation, the amount of work that goes on in the background to be able to do what all of us do in this sport, past and present, is really remarkable and I love being a part of that.

“I love that challenge, I love the challenge that Max [Verstappen] gave me today. I love seeing him behind me, seeing the challenge that Daniel (Ricciardo) gave Max also, the sport, the smell of it, the whole aura and atmosphere it creates is going to be difficult to let it go.

“But I do feel, whilst I’m older than these guys, I feel as young as them, at least, in spirit. I’m still very much a kid when I’m off the camera.”

In his 14th F1 season and aged 36, Hamilton will now be looking to match Schumacher’s record of seven titles while taking the outright lead in terms of race wins.

On how long he can continue in the sport, Hamilton said: “That will probably change when I start seeing grey hairs and stuff but I’m good for now.”

The Brit made his debut in 2007 with McLaren, missing out on the title in his rookie year by just one point to Kimi Raikkonen.

Reflecting on his career, he said that he has always worked as hard as he could in order to repay the faith he has been given by the teams he has driven for.

“What I’m really proud of and I’m really happy with [was] when someone takes a chance on you – which is what Mercedes did when I was 13, and Ron (Dennis) did with Norbert (Haug) and Dieter (Zetsche) when they decided to put me in the [McLaren] car when I was 22 – working as hard as I could to make sure that they didn’t regret the decision,” Hamilton explained.

“Then moving to this team, I don’t know how I knew it so well, but I knew it was the right thing for me. I didn’t know how long it was going to take us to win, but I loved the idea of working with the guys.

“I wish you guys could see the change s I did from the first day in the seat fitting and the things I get involved in in the background to change, which I’ve done every year in the team.

“Collaborating with a large group of people who are incredibly intelligent, way, way more intelligent than I, and create an understanding, collaborate and work towards a common goal. That’s for me the proudest thing that I feel that I experience through that time.”