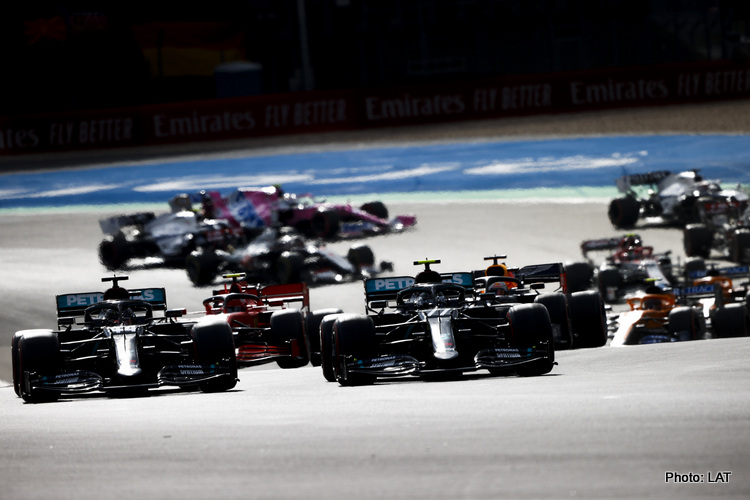 Starting second on the grid, Hamilton passed teammate Valtteri Bottas for the lead late in the first stint, before the Finn suffered a race-ending power-unit failure.

Max Verstappen came home in second as a result and also picked up the fastest lap, while Daniel Ricciardo earned Renault its first podium finish since returning to the sport in third.

This was hardly a perfect weekend for Hamilton, who was beaten soundly in qualifying. However, he brought his A-game to the race and used his incredible tyre management skill to his advantage and forced a mistake out of Bottas.

Another great weekend for the Dutchman, who was so close in qualifying and then able to keep the Mercedes honest during the race. Bagged the fastest lap late on too, and looked very happy with his weekend.

What a season that Ricciardo is having. The Australian is getting everything out of his car and finally got a well-earned podium. Was perhaps lucky that the late safety nullified the threat of Sergio Perez, but nonetheless, a great weekend.

Looks to have found his best form in recent weeks, but Perez will still be disappointed to have not been able to challenge Ricciardo for the podium at the end.

Sounded unhappy with the weekend and despite the fifth-place finish, he was probably correct. Out-qualified by Lando Norris before benefitting from the level attrition, this was not a vintage Carlos Sainz display.

One of the drivers of the season, Pierre Gasly seems to always move through the field and get the most out of his car. Battled well with Alex Albon and would have taken satisfaction in coming out on top.

Great effort in qualifying but it was obvious that his car did not have the race pace. Did well to hold off the faster cars in the opening stages and will feel that seventh was the best result possible.

Qualified last and benefitted from the level of attrition, but to come from the back to the points having had no practice time at all is simply incredible. Surely, the Nico Hulkenberg is in line for a permanent seat next season.

Best drive of the season for Romain Grosjean, who recovered from an early finger injury to earn a finish points finish of the year. The Haas looked better in both race and qualifying trim, which bodes well for the Frenchman who is bidding to keep his seat for 2021.

A solid weekend, with the Italian beating his teammate in qualifying an earning just his second points finish of the season. Unspectacular, but he was mistake-free and benefitted from the number of retirements to bag a precious point.

A poor weekend for the four-time world champion, who was off the pace in qualifying and then made another enforced error during the race. Sebastian Vettel surely cannot wait to leave Ferrari.

A great achievement to beat Rubens Barrichello’s record for most race starts, but Kimi Raikkonen’s race was about as exciting as his radio response to his team’s congratulations. Hit off George Russell due to some clumsy driving and was just adrift of the points.

Will not have enjoyed watching his teammate pick up his first points of the season, the Dane’s race came undone due to a sub-optimal strategy that saw him lose ground after a good start.

Made places on the start and managed to avoid finishing last, which is something in that Williams. Was slightly closer to Russell in qualifying, but still looks off the pace.

Made an error that forced to him run over the grass and skip the chicane, but had his race ruined due to a poor mistake by Albon who took off his front wing. Behind Gasly all weekend though, who showed what the car was capable of in sixth.

Really unfortunate to have a potential battle for the podium ruined by a power-unit issue. Otherwise, he was very impressive throughout and had a nice gap to his teammate in qualifying.

Really poor from Albon, who flat-spotted two pairs of tyres and collided with a driver from sister-team Alpha Tauri. Half a second down on Verstappen in qualifying once again, the pressure is really building on the Thai driver.

Really close to Ricciardo in qualifying and running well in the race until he ran in reliability issues.

One key mistake ruined what was otherwise a really impressive weekend, where he took a convincing pole position and fought Hamilton at the start. The DNF all but gifted Hamilton the title, but he lost the win due to the difference between the two drivers when it comes to tyre management.

Felt he was on course for the points before he was punted by Raikkonen. Continues to over-achieve in a struggling car and will surely secure those first points soon.