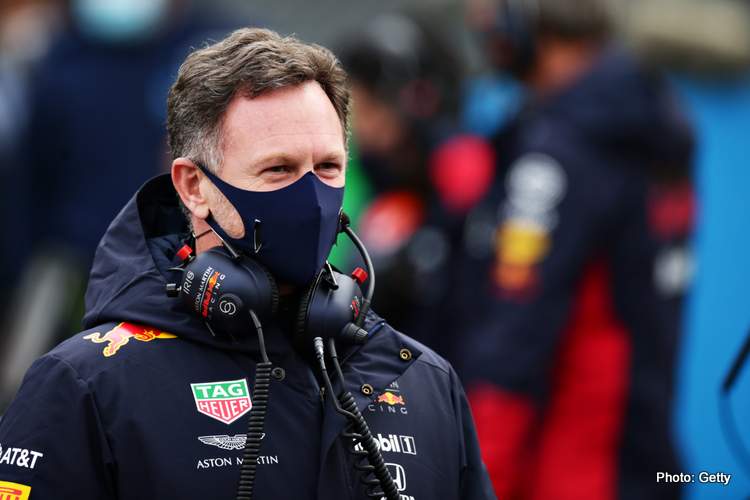 Red Bull team principal Christian Horner was at it again, like he did last time out after the Russian Grand Prix, donning his rose-tinted glasses in his assessment of Alex Albon’s fruitless and woeful afternoon at the 2020 Eifel Grand Prix.

Again demolished by his teammate Max Verstappen in qualifying, the Dutchman went on to record a strong second place with a car he believes is getting closer to Mercedes with every race.

Not so for Alex who started from fifth on the grid, and soon lost a place to Renault’s Daniel Ricciardo before being gobbled up by Sergio Perez in the Racing Point and Lando Norris’ McLaren.

In a car, which in Max’s hands was up the road chasing the leaders, Alex found himself on the defensive and flat-spotted his tyres in the process; as a result, he was brought in on lap seven to change them and thereafter things got worse.

Before the pitstop, the #23 Red Bull was 18.1 seconds behind Max, after the pair had started nose-to-tail on the grid with Max on row two in third and Alex a couple of meters directly behind on the third row.

Emerging from the pit in last, he got into clumsy scraps as he made his way up the order that eventually cost Alpha Tauri’s Danil Kvyat a front-wing and a few laps later got into fisticuffs with Pierre Gasly that might have ended sourly.

Alex was like a Red Bull-in-a-China shop until, thankfully, on lap 23 the team decided to retire the car due to a pierced radiator and subsequent overheating of the Honda-PU.

Preventing him doing more damage would have been a sufficient excuse to retire the car.

Nevertheless, this is what Horner had to say of his driver on the day, “Alex’s day was far from simple with a big lock-up into Turn 3 on the opening lap causing us to pit him early as the vibrations took us close to the safety threshold.

“He was then making good progress back through the field but was incredibly unlucky to pick up some debris, which pierced the radiator, causing his engine temperatures to rise which unfortunately forced us to retire him,” bemoaned the Red Bull team boss.

Indeed, Alex did make “progress” if getting by a trio of Ferrari-powered mobile-chicanes and the Williams bricks can be called that and then made hard work of it, in a car that in other hands set the fastest lap of the race.

A key moment was when during his side-by-side duel with a feisty Gasly, on lap 22, an exasperated Alex gasped over the radio: “These guys race me so hard.”

Very naive to think the AlphaTauri boys Pierre or Danill Kvyat were going to give ‘the-guy-who-has-their’ seat a free pass; racers don’t do that, they rather stick in the knife and turn it. That’s racing.

Red Bull have run out of excuses for this failed experiment, Alex should at this stage be helping Max give the Mercs a go and a crack at the title. But the team is essentially a one-man show and seem intent on keeping up the charade with necks firmly dug deep in the sand on this one.

Their notorious impatience turned into inexplicable restraint with their blatantly underperforming driver.

Alex summed up his afternoon at Nurby in the team report, “The pace in the car was good today so it’s a shame to have a result like this and not see where we could have finished the race.

“I had a lock-up avoiding contact on the first lap which meant I had to pit really early because I had severe vibrations from a flat spot on the tyre.

As for nearly taking out the organisation’s junior team and damaging Kvyat’s from wing, Alex admitted, “I don’t really know what happened with Daniil and I need to watch it back. I think he may have run a little wide into the chicane when we did the re-start and I guess it was a bit of misjudgment from my side.

“After that, the Team saw the temperatures rising and I was asked to box and then retire the car. It initially looked like a power unit issue from the data but the Team investigated and found that some debris had pierced the radiator system which led to the rising temperatures.

“It is definitely not the way I wanted to end the weekend as the car felt good, but onwards and upwards and I’m looking forward to Portimao in a few weeks’ time,” added the Thai driver who lies seventh in the championship table on 67 points, with teammate Max in third on 147 points.