Verstappen: A step forward but we still need to improve 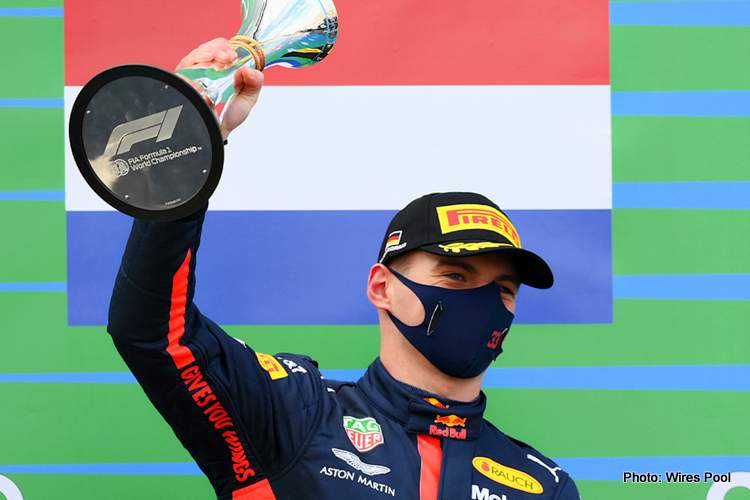 Max Verstappen has responded to Honda’s recent Formula 1 pull out news by scoring an emphatic second place at the 2020 Eifel Grand Prix, encouraged by the closing gap between Red Bull and Mercedes that has race-winner Lewis Hamilton worried.

The World Champion, who matched Michael Schumacher’s record 91 Grand Prix victories on Sunday at Nurburgring, in the wake of the race has warned his team that Red Bull are too close for comfort.

“The Mercedes was just a little bit too fast for us but I managed to get that fastest lap for the extra point so I’m happy with that. We finished second, which was where we belonged.”

“We have taken a step forward with the car this weekend, so I am of course happy with that, but we still need to improve and we will keep pushing so we can take the fight to Mercedes every weekend.

“The Safety Car re-start was not easy with the cold temperatures and the tyres, especially with the others behind having a bit of a temperature advantage after catching up to us, but I managed to keep them behind and pull away again with Lewis.

“I’m of course also happy with the point for the fastest lap which was an extra bonus. It’s also good to see Daniel back on the podium, he is a great driver and he really deserves it,” added Max, tipping his hat to his former teammate.

Team boss Christian Horner gushed forth in his post-race report, “It is fantastic to see Max on the second step of the podium again with yet another stellar drive and we do seem to be a small step closer in the fight with Mercedes this weekend.

“Max was able to keep within striking distance of Lewis for the entire race and it all got a little more interesting when the field closed up behind the Safety Car on lap 44. Because the Safety Car was out for so long the tyre temperatures plummeted which Lewis, with the DAS system, was able to handle a little better than we were.

“Max managed the tricky re-start well and from there it was a pretty straight forward race to the finish for second place,” summed up Horner.

Max on 147 points remains third in the world championship standings with six rounds remaining, behind second-placed Valtteri Bottas on 161 and Lewis Hamilton on 230.