The Morning After: Bottas at his best 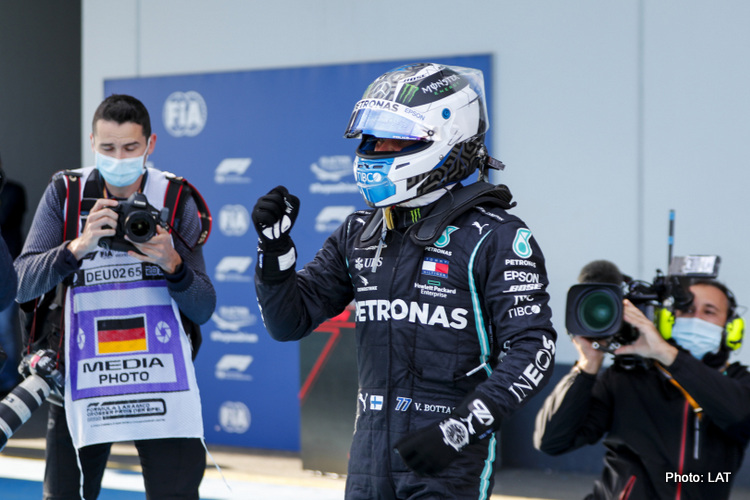 After Friday at the Nurburgring that saw absolutely nothing to remark upon, Valtteri Bottas ensured that Saturday turned out the complete opposite.

As much as questions abound about the Finn’s future with the team – and indeed, will continue to do so for the foreseeable future – he deserves nothing but praise for what was undoubtedly his best effort on a Saturday of the 2020 Formula 1 season.

No, I wouldn’t call his 0.256s over Lewis Hamilton a shellacking exactly, but his other two poles this season were won by less than a tenth, and in an overall qualifying battle he trails on average by a similar margin, it’s quite the turning of the tables.

Of course, those tables can quickly be flipped again should Hamilton get the better run into the first corner, but there’s no denying Bottas came up big here. Given the championship stakes, he needed this pole position, and he got it. What more could you ask for?

Hats-off to both Max Verstappen and Charles Leclerc for their respective performances. Max certainly put the fear of god into Mercedes, while Charles continues to out-drive that dog of a Ferrari. Sheer quality from both.

To think Nico Hulkenberg went from sitting in a coffee shop at 11am to driving a F1 car just a few hours later – some days I struggle just to get out of my pajamas.

The theoretical quickest pit-stop strategies predicted by Pirelli for the Grand Prix based on the data collected from FP3 and qualifying and on weather conditions expected for the race, are as follows:

The most likely strategy for the 60-lap Eifel Grand Prix is a two-stopper, but with the track not having been used for Formula 1 since 2013 and with no running yesterday, strategy is something of a question mark for all the teams. Adding to the tactical complexity is the fact that tomorrow could be wet – and it will certainly be cold – making it even harder to accurately predict tyre behaviour.

The theoretically quickest way will be to start on the P Zero Red soft, then on lap 19 switch to the P Zero Yellow medium for 22 laps, and finally do a 19-lap stint on the soft again. As usual, this combination of compounds can be used in any order.

Second-fastest is another two-stopper: one 18-lap stint on the soft plus two 21-lap stints on the medium.

Slower is a one-stopper, going from medium to P Zero White hard after 29 laps (or the exact opposite, running 31 laps on the hard before going to medium). The data suggests that a one-stop strategy using medium and soft is not possible.