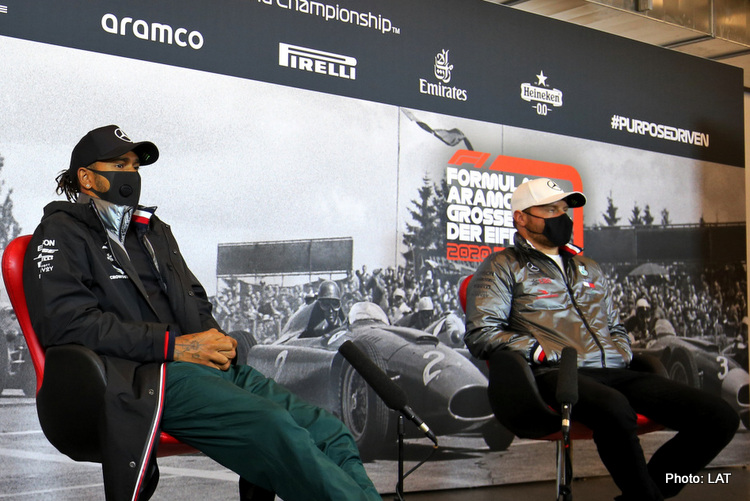 Bottas took pole position at the Eifel Grand Prix on Saturday, with championship leader Hamilton second as Mercedes locked out the front row for the eighth time in 11 races this year and 72nd in total.

They did so despite Friday’s two 90 minute practice sessions at the Nuerburgring being wiped out by bad weather, condensing the German event into two days from three.

Both agreed that was no bad thing.

“I think currently, in the normal weekend, I feel like there’s too much practice,” said the Finn.

“I kind of like it with a bit less practice.”

Hamilton, on the brink of a record-equalling 91st career victory, has long been critical of a format that has remained little changed for decades.

The sport has programmed a two-day race weekend for Imola in Italy next month but the Nuerburgring got there first.

“I don’t think we need to be here on Fridays so it was totally fine for me,” said Hamilton.

Red Bull’s Max Verstappen, who qualified third fastest, agreed the lack of Friday action had made things a little rougher around the edges.

“You would go a little bit faster (with more practice sessions),” said the 23-year-old Dutch driver.

“When you have little issues or whatever, you can go over it through a whole night. You can look at it back in the factory as well, work in the simulator and stuff but overall, like Valtteri said, we have a lot of practice.

“You also take your time to settle in. Now, that it’s only one session you’re straight away on it.”