Hamilton: We have got a serious fight on our hands 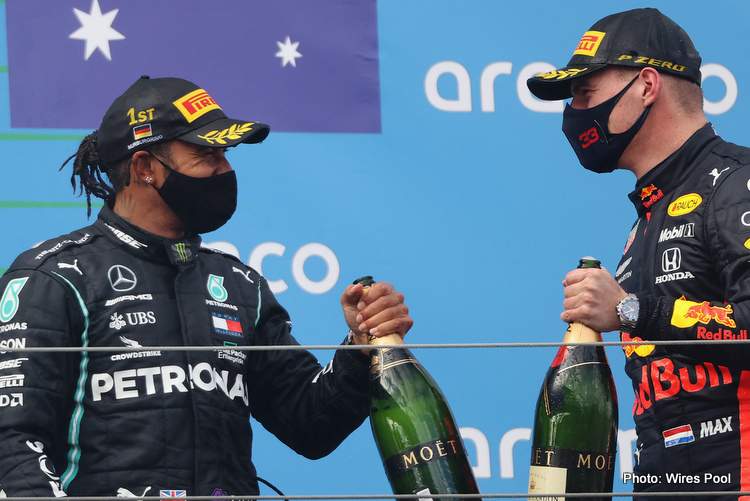 Rightfully so post-race headlines have mainly been about Lewis Hamilton matching Michael Schumacher’s incredible record of Grand Prix victories when the Briton claimed the top step of podium at the 2020 Eifel Grand Prix.

Lewis was moved and humbled by the presentation of Schumi’s iconic red helmet by son Mick Schumacher immediately after the race, and then spoke about this sentiments as the reality of the achievement sunk in at Nurburgring on Sunday. Report here>>>

To get that win on Sunday there was still a race be run and win, and he did so in his style.

Starting from second place on the grid, Lewis managed a rapid start, while pole man and teammate Valtteri Bottas was sluggish off the line but his Merc picked up speed through the second phase as the pair snake, side-by-side, through and out of the elbow-like Turn 1 until the #44 car backed off and #77 took the lead.

But Lewis was not done by no means and kept up the pressure as the black cars set the pace at the front until on lap 12, Valtteri made a mistake when he was too late on the brakes into T1 and Lewis got a free pass to take victory.

He reflected on the race, “I had a good start to get alongside Valtteri. I tried to give him as much room as possible. He was in my blind spot so I moved out wide and he did an amazing job. I remember coming out of the corner thinking ‘good on you man’, I wouldn’t expect it to be any other way.

“Then it was about trying to figure out how I could beat Valtteri, so I really had to look after the tyres and make sure I stuck with him. I saw he was struggling a bit and knew the opportunity would come, but then he had the lock-up.

“I managed to build a good gap after that, but then the Safety Car came out. Max was right behind me and I knew I had to have a strong restart to keep him behind. I managed to catch him out which is always nice and that gave me the jump I needed.

“It was not an easy race. Max drove extremely well. You could see his pace at the end. We have got a serious fight on our hands. Red Bull have a great car and are continually impressive.

“It is going to be this close between us to the end of the season and into next. The closest racing will be between us two over the next 12 months.” added Hamilton who now leads the championship standings from Bottas by 69 points with six rounds remaining.

Feeling really honoured to be mentioned in the same likeness as a driver like Michael. What happened today is beyond my wildest dreams. I can’t express how grateful I am to all the fans, and to my amazing team for being with me on this journey. This is for us #91 pic.twitter.com/ZXaq17qd06