Hamilton: Big thank you and huge respect to Michael 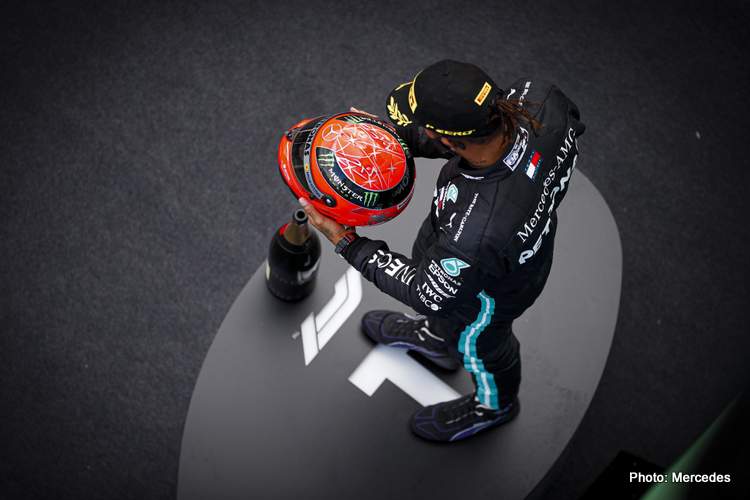 On Sunday at the 2020 Eifel Grand Prix, Lewis Hamilton equalled Michael Schumacher’s all-time record for Formula 1 career victories, the 91st of their respective journeys in the top flight.

The Mercedes driver now set to make it 92, if not more in the remaining races of the season and, thereafter, most likely next year, Lewis is likely to reach 100 if he and his team sustain the form they currently enjoy into the new years.

Records to break have almost run out; with 160 podium finishes compared with Schumacher’s 155, 96 pole positions to 68 and 155 front-row starts compared with 116. Michael’s 77 fastest laps compare with Lewis’ 51.

Speaking, humbly and emotionally, immediately after achieving the feat at Nurburgring, the World Champion elect (for a seventh time) said, “91 wins! It never gets any easier, it’s almost like it’s getting harder than it was to get my first win in Montreal.

“Thank you so much. It’s such an honour. I don’t know what to say. When you grow up watching someone and idolising them. What he was able to continuously do.

“I remember playing [as] Michael Schumacher on a game called GP2. Seeing his dominance for so long, I don’t think I imagined I would be near him in terms of records.

“So it’s an incredible honour. It’s going to take some time to get used to it. As I came in the pit lane that was only when I realised I had equalled the record.

“I hadn’t even computed it when I crossed the line. I couldn’t have done this without this incredible team pushing behind me. So a big thank you and huge respect to Michael.”