Bottas: Something wrong with the Power Unit 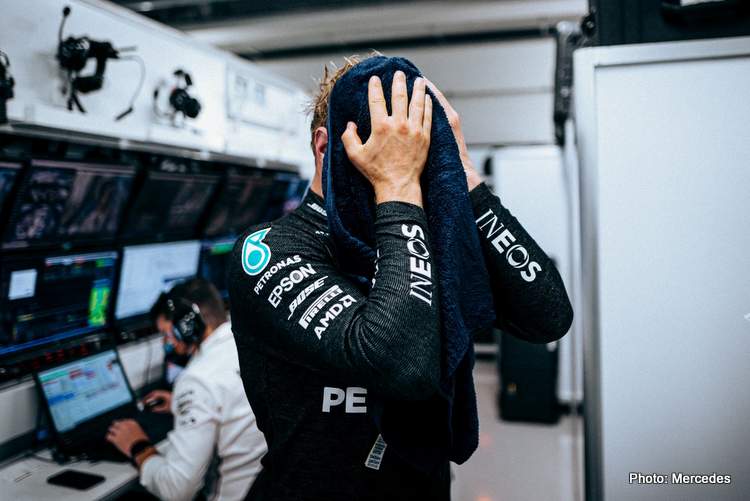 Valtteri Bottas started the 2020 Eifel Grand Prix like a man on a mission, setting a blistering pace in the lead with his Mercedes teammate Lewis Hamilton chasing hard but on lap 12 of the race things went awry for the Finn.

The rot started on lap 12 when Valtteri locked up and went gone in too deep into Turn 1 and opened the door for Hamilton to sweep past through in the next sequence of corners. After that it was downhill before the team pulled the plug on lap 18, the championship now surely out of reach.

Valtteri lamented in the team report, “It’s a frustrating way to finish a race, it was really good fun until I started to lose power during the Virtual Safety Car. The start and the battle with Lewis through the first couple of corners was nice, there was no way I was going to make it easy for him.

“Obviously, later on I had a lock-up into Turn 1 and lost the position, which meant I stopped early. The new tyres were starting to feel pretty good and I was hopeful I could have potentially undercut. Everything was still to play for.

“But then it was quite a big loss of power – something wrong with the Power Unit. We’ll have to investigate what that is, but it was really unlucky.

“I went around for a couple of laps to see if it recovered but there was nothing else we could do,” explained Valtteri who leaves Nurburgring second in the championship, trailing Lewis by 69 points with six rounds remaining in the championship.

Mercedes team boss added, “The pace of Valtteri’s opening few laps were incredible and it was such a shame he suffered the lock-up and then had the Power Unit issue. Otherwise, he would have been in the fight for victory, for sure. We still need to analyse what caused his retirement, because we don’t yet know the real cause.