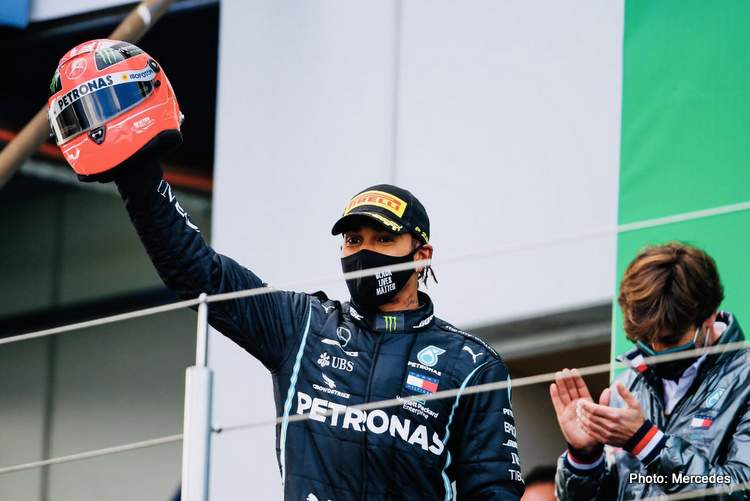 Having failed to match Michael Schumacher’s Formula 1 record 91 race victories at the first attempt in Russia, Lewis Hamilton made sure to capitalise on his second opportunity in winning the 2020 Eifel Grand Prix on Sunday.

Finishing 4.470 seconds ahead of Red Bull’s Max Verstappen, Hamilton came through an eventful opening phase to take a straightforward victory from second on the grid.

Second on the grid behind Mercedes teammate Valtteri Bottas, Hamilton was unable to make a move stick as the two battled wheel-to-wheel through the first two corners, but seized his moment when the Finn flat-spotted a tyre heading into turn 1 on lap 12.

Ostensibly struggling with tyre temperatures in the chilly conditions, Bottas subsequently didn’t have the pace to match his teammate, and quickly saw his afternoon go from bad-to-worse as an engine failure brought his race to a premature conclusion.

Never significantly challenged by Verstappen even with a late safety car due to an electrical failure for McLaren’s Lando Norris, Hamilton now stands equal with Schumacher, whose son Mick gifted him with a race helmet from his final season in F1 in 2012.

“I don’t even know what to say,” a humbled Hamilton said of the gift. “When you grow up watching someone you generally idolise them in terms of the quality of the driver they are but what they are able to continuously do race on race, year on year, week on week.

“There was a game called Grand Prix 2 and I remember playing as Michael and seeing his dominance for so long I don’t think anyone, especially me, didn’t imagine that I’d be anywhere near Michael in terms of records. So it’s an incredible honour and it’s going to take some time to get used to it.

“When I came into the pit lane that’s only when I realised I had equalled it, I hadn’t even computed it when I had crossed the line. I couldn’t have done it without this incredible team.

“A very big thank you and huge respect to Michael,” added the World Champion elect.

Apart from Hamilton, the other major story of the day was who benefitted from Bottas’ absence – Renault’s Daniel Ricciardo.

Having come close on several occasions in 2020, the Australian finally got his first podium for the Enstone outfit after jumping Charles Leclerc and Alexander Albon from his P6 start, and then holding-off a serious challenge from the Racing Point of Sergio Perez in the final phase of the race.

“It’s been a while! It feels like the first podium all over again,” he told David Coulthard afterwards. “It’s been two and a half years or something and the feeling is really nice. It’s fresh.

“Wow. So happy. To see everyone as well, we’ve all waited a long time for this so I think everyone is going to soak it up.”

Most importantly, Ricciardo confirmed that his achievement means team principal Cyril Abiteboul will be getting a tattoo to commemorate, “It’s real – it’s going to happen! We’ll have to do some thinking now.

“Probably something to do with me but with a German flavour. This is the place we did it, so a little tip of the hat to something in Germany as well.”

Behind the top four, Carlos Sainz was fifth for McLaren narrowly edging the AlphaTauri of Pierre Gasly by 0.861s.

Unable to back-up his strong effort from qualifying, Ferrari’s Charles Leclerc disappointed in only managing seventh at the flag. Conversely, late-replacement Nico Hulkenberg did a stellar job to come home eighth, having started last on the grid for Racing Point.

Romain Grosjean picked up his first points of the season to finish ninth, with the under-fire Antonio Giovinazzi taking a much-needed point to round out the top ten.

Ferrari’s Sebastian Vettel saw his miserable run of form continue, being fortunate an early spin didn’t send him into the barriers prior to finishing 11th, only just holding-off Kimi Raikkonen in 12th. The day’s other history-maker, the Finn made an F1-record 323rd race start.

Kevin Magnussen was 13th for Haas ahead of Nicholas Latifi, with Daniil Kvyat the last of the finishers in 15th.

Aside from Bottas and Norris, the other retirements were Alexander Albon – who repeatedly flat-spotted tyres before pitting to retire, Esteban Ocon – who had a hydraulics failure, and George Russell – who was collected in a shunt with Kimi Raikkonen. 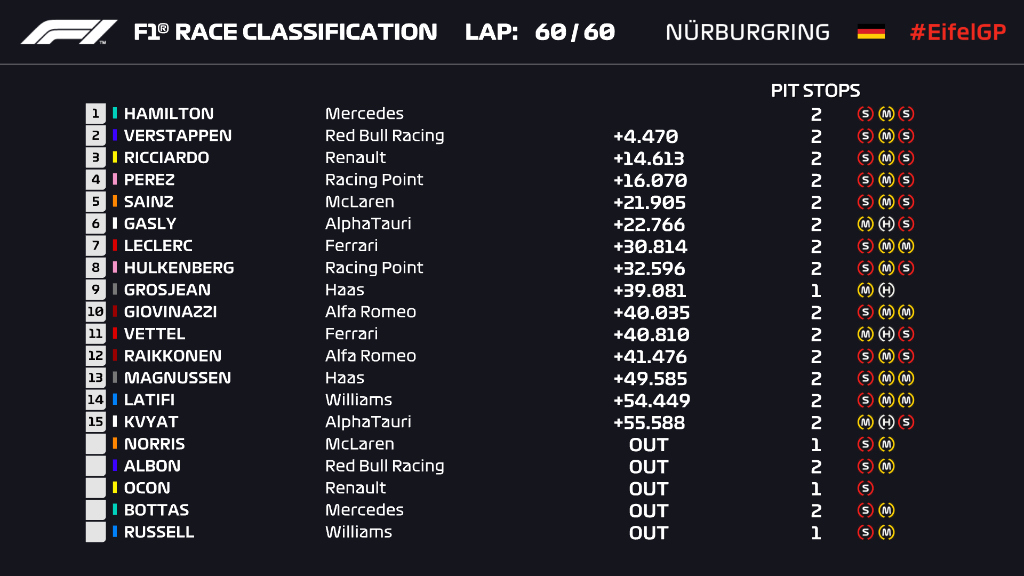 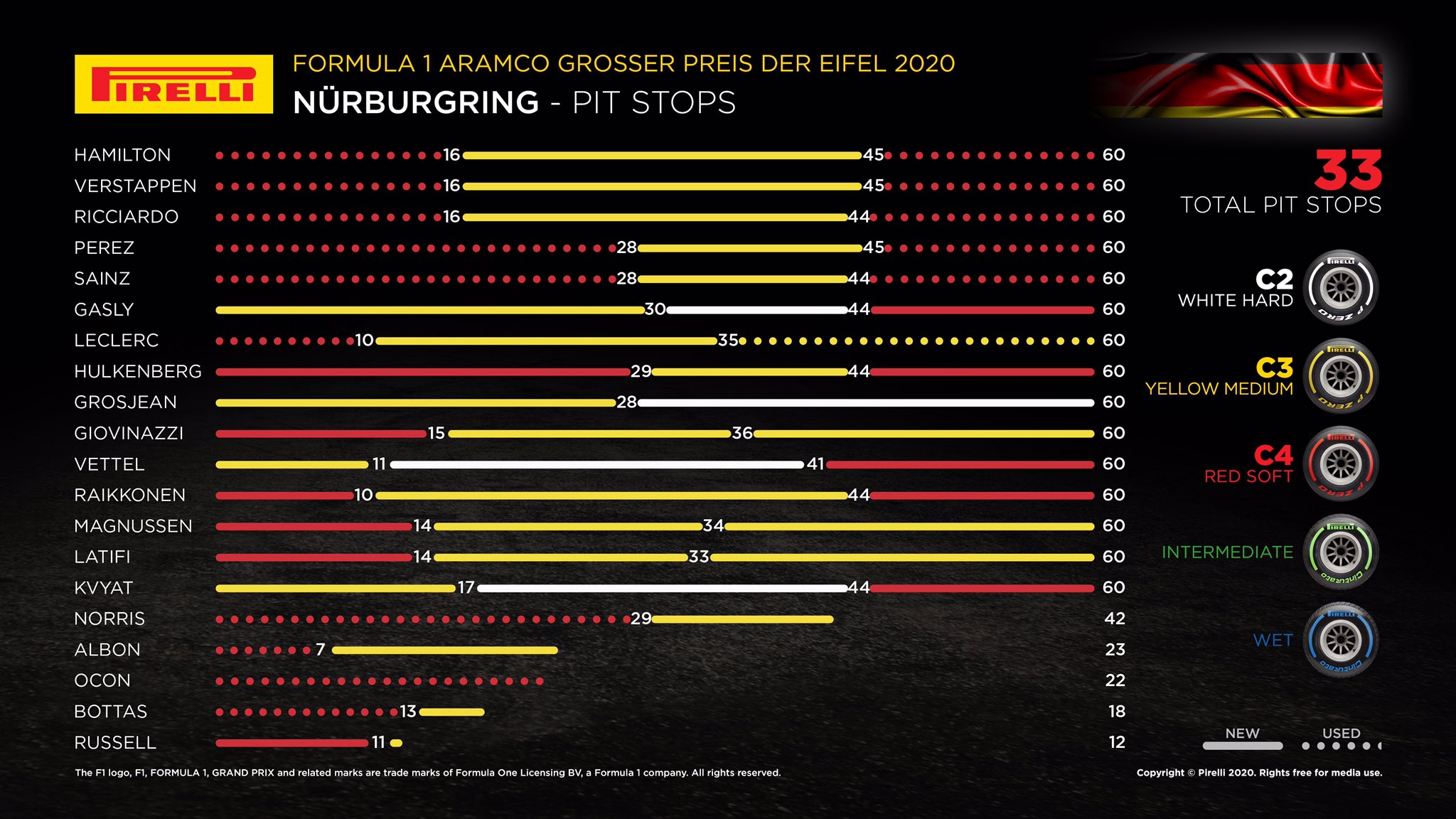 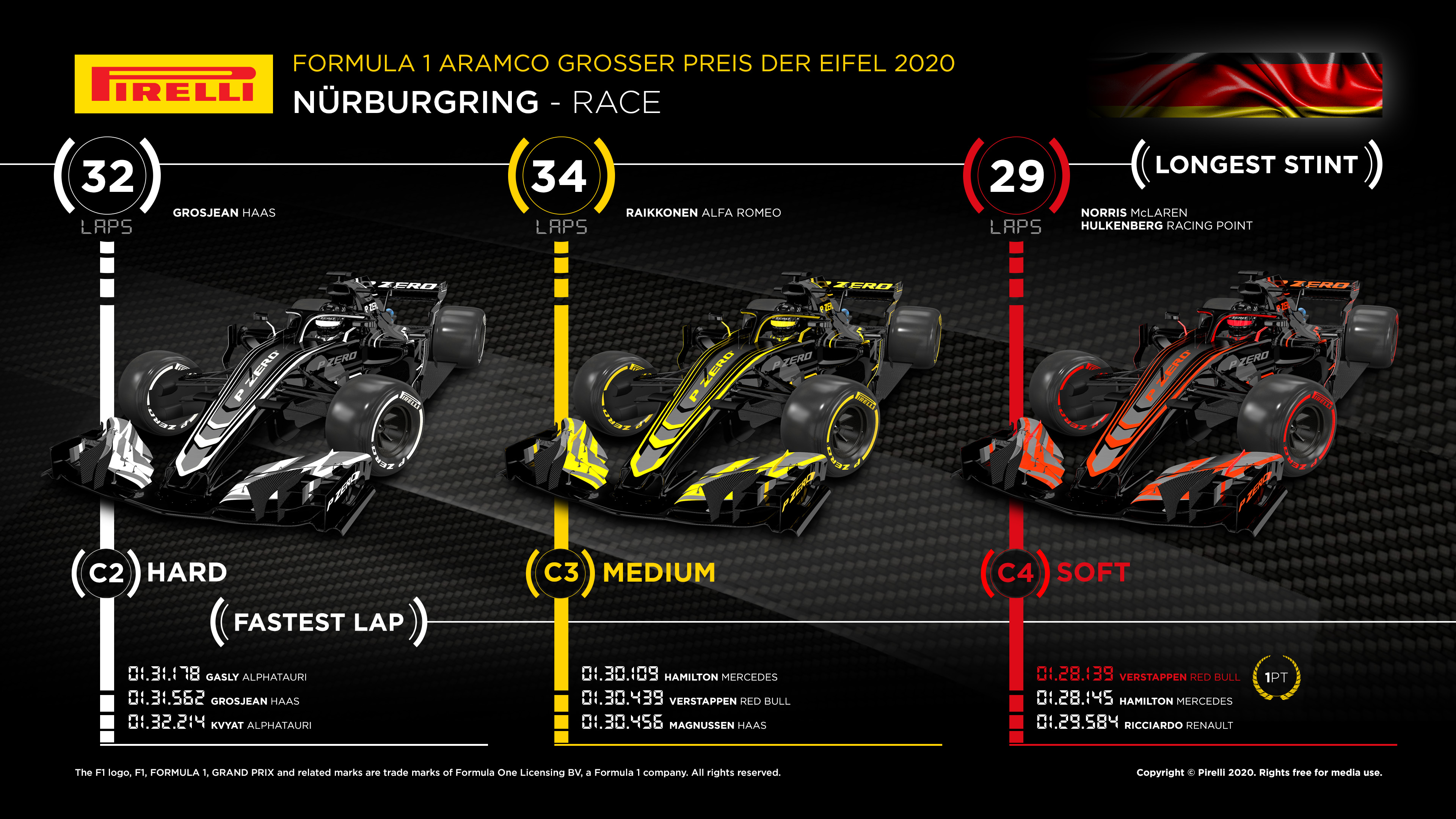 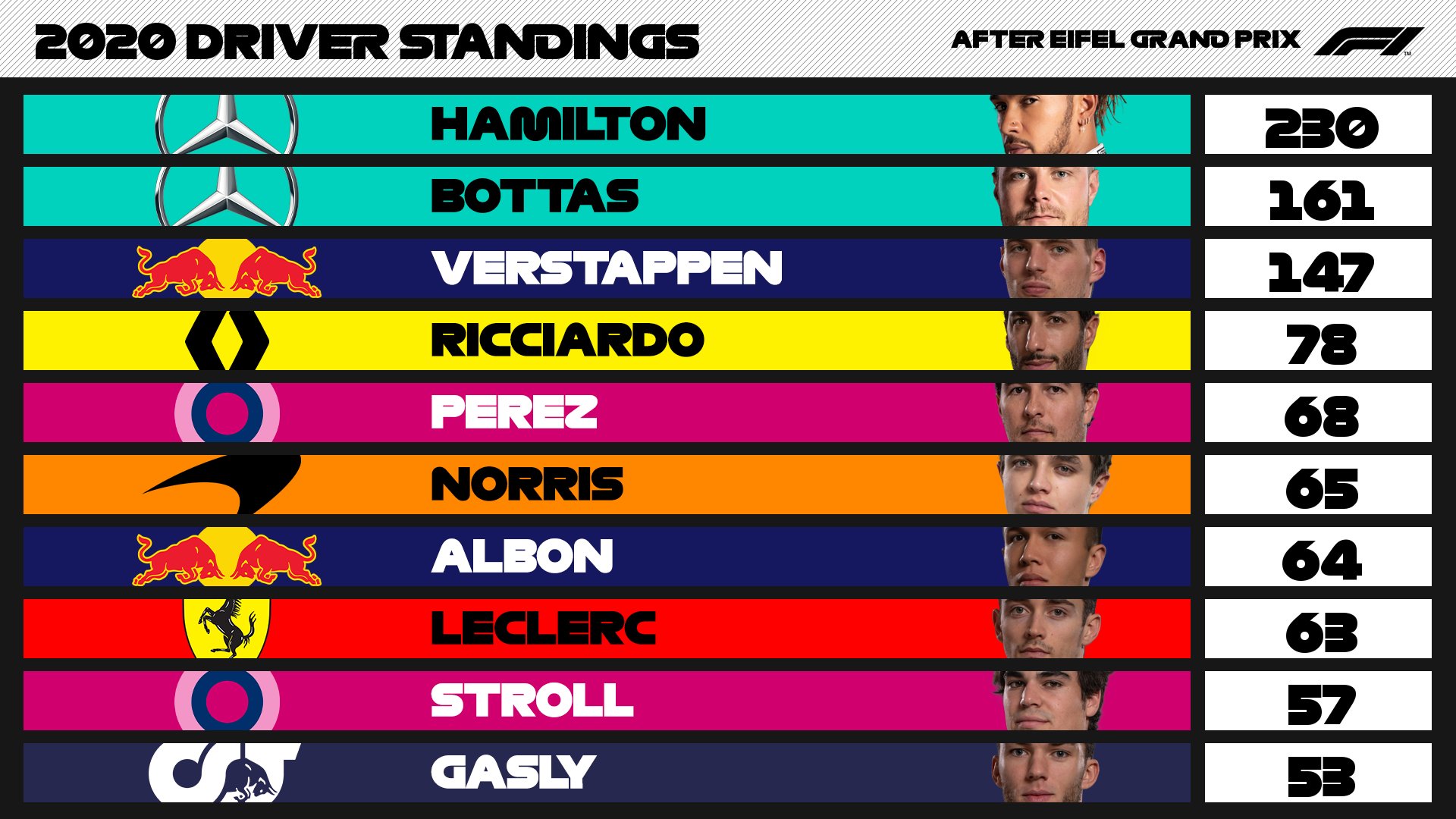