Verstappen: We are closing in on Mercedes 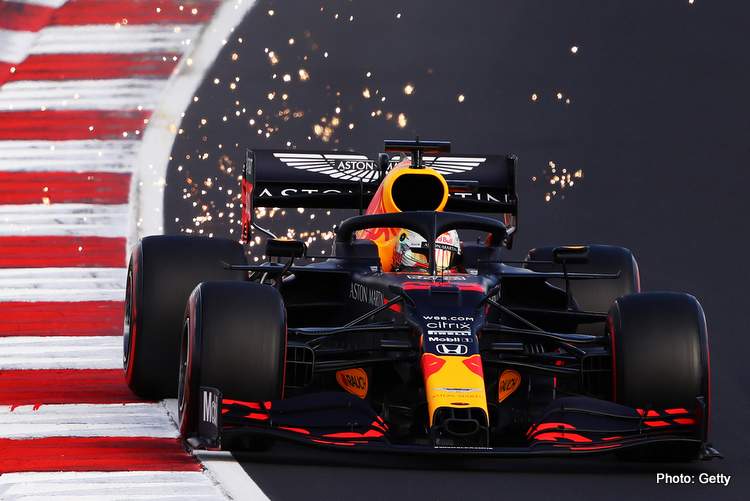 Had Max Verstappen pipped the mighty Mercedes for pole position for Sunday’s 2020 Eifel Grand Prix, we had the headline planned: Thank God for Max Verstappen!

Alas that little brainwave was spiked when the Mercs claimed the front row but, as usual Max was not that far off their pace and will play the role of David in another battle with Goliath.

Maybe we can run that headline on Sunday afternoon…

He has beaten them before and clearly his intention to do so at Nurburgring tomorrow, come rain or shine.

Max said in his qualifying report, “Today has been a good day and we can be happy to be on the second row of the grid. It was an interesting qualifying and after missing both practice sessions yesterday, it was busy for everyone today but overall I think it was positive. The car has been handling well and everything is a bit more stable.

“I felt quite comfortable but of course there are always a few balance areas you want to improve. In Q3 when it really mattered, I just started to understeer a bit too much and when it’s so cold, you grain the front tyres and just eat up the rubber so that cost me a bit of lap time.

“I think we are closing in on Mercedes which is positive and what we’re working towards. We are usually closer to them on Sundays and tomorrow it will be even colder so it will be interesting to see what the tyres do and how they’re going to behave.

“It’s a fun track to drive and tomorrow is a bit of a question mark for everyone but hopefully it is going to be exciting,” added the Dutchman who was 16-years-old when a Grand Prix was last held at the Nurburgring.

The gulf to his teammate remains wide, with Max’s 1:25.562 best effort half a second up on Alex Albon in the sister car.

Nevertheless, the Thai driver who will start from fifth on the grid saw the positives in his performance on the day, “I’m quite happy with my qualifying lap but there are still areas to improve. Even though we haven’t had much time to practice, straight away the car was feeling hooked up.

“P5 is not a bad place to start and we can fight from there. We obviously have the two Renaults behind us so it won’t be easy, we’ll have to get our elbows out for Turn One!

“The real challenge will be when we start the long runs as we haven’t had much practice for that. We’ll see how it goes with the weather and there are plenty of opportunities to score some good points,” added Alex.

Team boss Christian Horner was happy, “Lining up third and fifth with Max and Alex for tomorrow’s Eifel Grand Prix is a solid result which provides us with opportunities for the race.

“It is obviously encouraging to see our gap to Mercedes decreasing on Saturdays and the factory have been working hard to provide us with updates to bring to the track each weekend.

“Alex displayed another solid Saturday as he continues to better understand the car and it looked like a second-row lockout had Leclerc not just pipped him at the very end of the session.

“It’s game on for tomorrow as both drivers aim to take the fight to Mercedes in what look like challenging weather conditions,” added the Red Bull team boss.