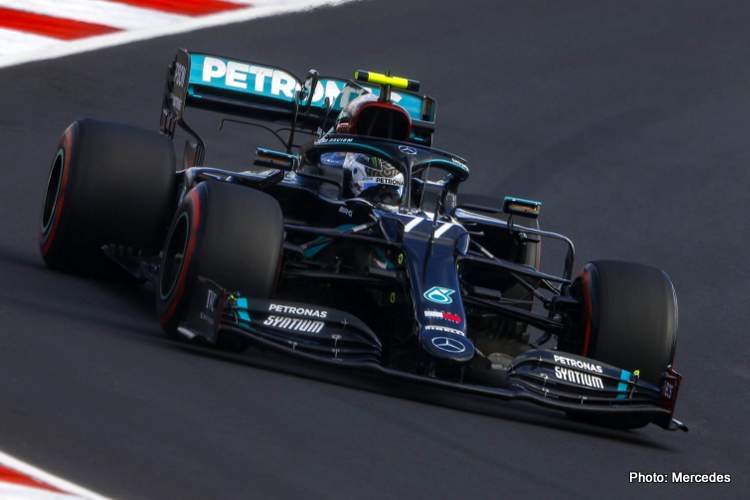 Preparation may have been at a premium, but Valtteri Bottas was able to deliver arguably his best qualifying performance of the season in taking pole for the Eifel Grand Prix on Saturday.

Recording a best time of 1:25.269, Bottas was 0.256 seconds clear of Mercedes teammate Lewis Hamilton, with Max Verstappen a mere 0.047s further back.

His third pole position of the season, Bottas’ margin here was considerably larger than the 0.012s and 0.063s gaps that separated him from Hamilton at the Austrian and 70th Anniversary Grands Prix respectively, the Finn doing to his teammate what had been done to him multiple times this season in blowing him out of the water.

That said, it certainly wasn’t any easy afternoon for the Finn, as both he and Hamilton started their final Q3 runs chasing Verstappen. Where Hamilton could only narrowly improve his first two sector times, Bottas carved out healthy margins, and then maintained his advantage to the line.

“It’s such a nice feeling when you get it on the last lap, with the last chance,” he said afterwards. “The last lap in Q3 was spot on, just what I was needed. It’s been pretty tricky this weekend. The only goal for tomorrow [is to win]. Hopefully I can get a good start.”

For his part, Hamilton rued his inability to string his sectors together.

“I’m sure when I look at the data there will be plenty of time [missed], he’s two-tenths ahead. Valtteri did a great job so congrats to him. There’s a lot to play for tomorrow so I need to get my head down.”

Having come so close through the first runs of Q3, Verstappen said he was encouraged by his performance.

“Overall I think a decent qualifying. It’s just in Q3, it started understeering a bit too much and when it’s so cold, you’re graining the front tyres and basically eating up the rubber when that happens. That cost me a bit of lap time.

“We are getting closer to Mercedes which I think is very positive. A little bit disappointing, I was expecting a little bit more but it is what it is.”

Outside the top three, Charles Leclerc managed another strong performance to finish fourth for Ferrari, 0.766s off the lead but 0.012s ahead of Alexander Albon’s Red Bull in P5.

P6 Daniel Ricciardo once again won the qualifying battle for Renault, albeit by only 0.019s from P7 Esteban Ocon in their closest duel yet.

Midfield rivals Lando Norris, Sergio Perez and Carlos Sainz rounded-out the top ten in eighth, ninth and tenth respectively, in what is sure to be a fight to watch on Sunday.

Pierre Gasly was 12th for AlphaTauri, with his teammate Daniil Kvyat only 0.072s back in 13th.

Needing a strong performance with potential replacements Mick Schumacher and Callum Ilott in attendance this weekend, Alfa Romeo’s Antonio Giovinazzi impressed to make Q2 and finish 14th, as did Kevin Magnussen, who was 15th for Haas.

Romain Grosjean was just outside the Q1 cutoff in 16th, while P17 George Russell continued his perfect record against Williams teammate Nicholas Latifi in P18.

Celebrating his F1-record 323rd start this weekend at the Nurburgring, Kimi Raikkonen will have to do it the hard way if he is to earn points with his 19th-best effort, while last-minute stand-in Nico Hulkenberg brought up the rear, his 10 laps in Q1 his only ones of the weekend so far, getting within a respectable two tenths of the Finn’s time. 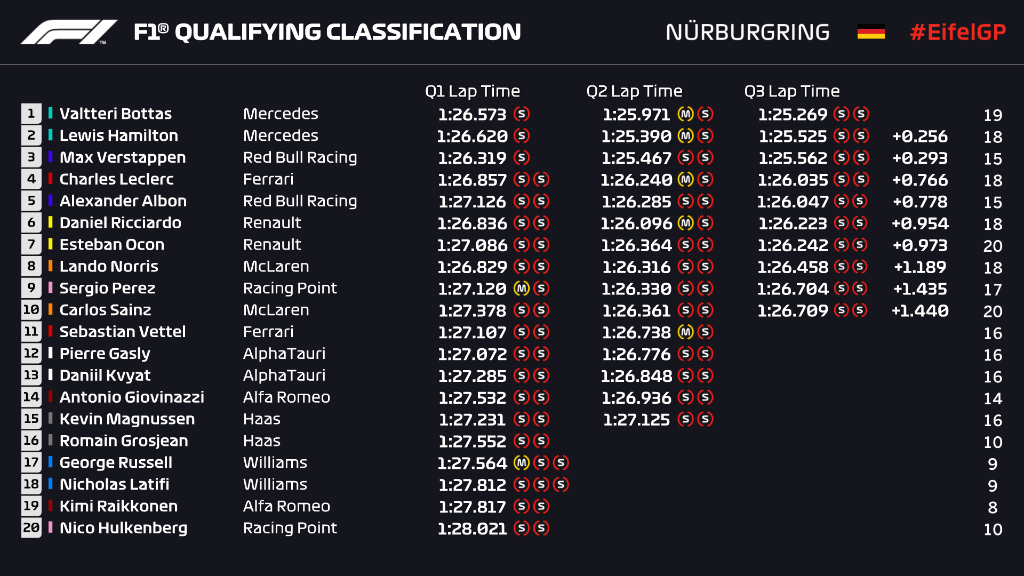