Bottas: I’ve only got one goal for tomorrow 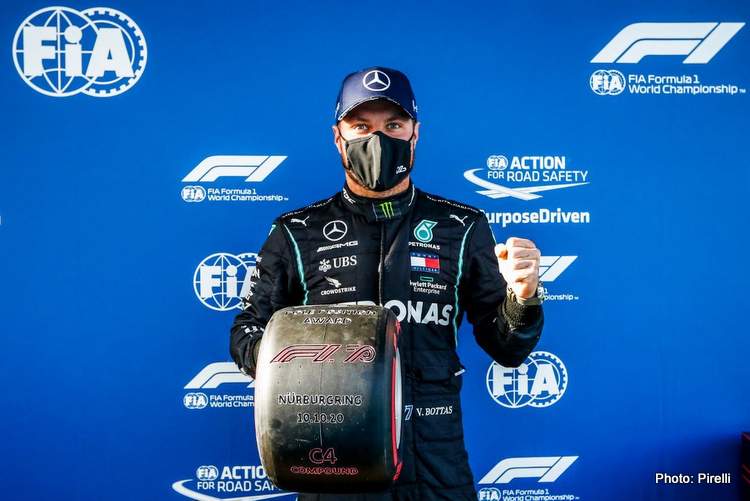 A quarter of a second up on Mercedes teammate Lewis Hamilton was a mammoth effort by Valtteri Bottas who claimed his 14th top spot start when he topped the times in qualifying for the 2020 Eifel Grand Prix.

The last F1 qualifying at the Nurburgring, in 2013, saw Lewis claim pole for the normally-aspirated Mercedes W04 with a best time of 1:29.398.

The Finn, was inspired in his post-quali report, “It feels great to be on pole position here and I really enjoyed that session. It’s such a nice feeling when you get it with your last chance in Q3. That final lap was spot on. I was struggling a little in the first sector beforehand, but I managed to get it right in the end.

“Obviously, it was pretty tricky with just one practice session and the cold conditions, so getting the tyres in the sweet spot on the out-lap was really important and I managed to get them in the window. It’s a new day tomorrow and is going to be an interesting race, especially with the lack of running we’ve had here and the temperatures.

“I’ve only got one goal for tomorrow, so hopefully I can have a good start and we’ll see what happens from there,” added Valtteri who won last time out in Russia, lies second in the F1 world championship standings, trailing Lewis by 44 points.

His boss Toto Wolff was impressed, “It was a perfect performance from Valtteri around here, he did a brilliant job to secure pole position for tomorrow and Lewis wasn’t far behind to lock out the front row.”

As were the tech boys, with Andrew Shovlin, “Well done to Valtteri for a great pole lap, he certainly saved his best till last. It’s great to be able to start with both cars on the front row.

“Lewis was putting in some really strong laps earlier in the session, but like Max, his best was in the second session and he wasn’t finding the same grip when it really mattered in the final session.”

Enjoyed that one, VB? ☺️ A few words from the #EifelGP pole sitter after a MEGA Saturday for the Team 👏

Who’s joining us for the big day tomorrow! 🌍 📺 pic.twitter.com/7gARVnUQUf