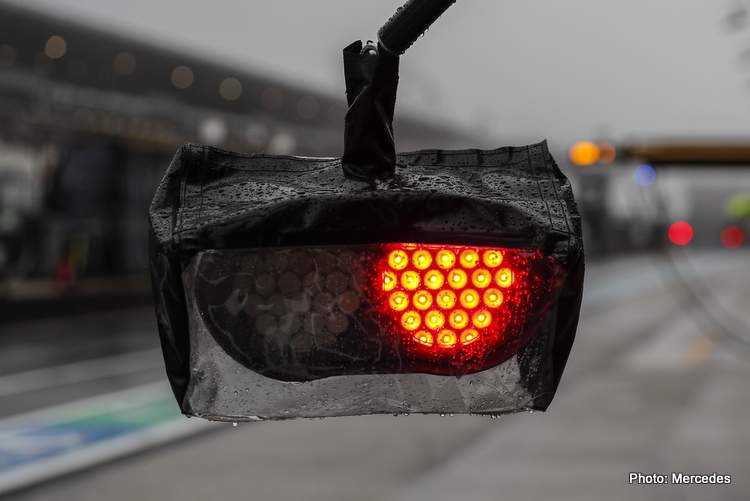 Rain and all-around miserable weather over Nurburgring rendered day one of the Eifel Grand Prix a no show, denying fans some an intriguing script that had been well planned in advance but had to be torn up on the day.

As reported earlier Mick Schumacher and Callum Ilot were denied their FP1 debut when the morning session could not start due to low hanging fog that prevented the medical helicopter from flying. The situation remained the same throughout the day and FP2 was similarly aborted.

Fans and teams were denied running of a Formula 1 car in anger at the Nurburgring since 2013, never have hybrid F1 cars been unleashed at the venue steeped in so much history.

Drivers will only have their first taste of the track in Saturday’s FP3 session, scuppering all well-laid plans to dial into the weekend. With one session to prepare for qualifying, tomorrow will be a very interesting day, weather permitting.

Guenther Steiner, Haas F1 Team: “Obviously it was a less than ideal day. I’m disappointed for Callum (Ilott) that he didn’t get his planned FP1 outing. It’s just one of these things, unfortunately, but he’ll remain with us throughout the weekend – so hopefully that will be a good experience for him. What else can I say really – the weather, as expected, has cost us our Friday practice. It will make our Saturday a little more interesting. It might not rain tomorrow but it’s certainly not going to be warm. We’ll keep our heads down as usual and let’s see what we can extract from final practice and apply in qualifying.”

Ciaron Pilbeam, Renault: “We’d rather have been out there running today, but sometimes the conditions just don’t allow for it. We now need to adapt our plans accordingly and obviously, this places a lot more emphasis on the third practice session than normal. We get to carry over an extra set of dry tyres so we will have three sets instead of the normal two and can put in more mileage. This is, however, assuming the track is dry, which is not at all certain. The forecast is better and clearer, but it will be cold and that means that the track will be slow to dry. We have to hope conditions improve sufficiently so the track will be open and we can do at least some running as we try to learn as much as we can.”

Andrew Shovlin, Mercedes: “Not running today is going to make tomorrow busy, but it’s similar to the challenge we are going to face in a few weeks when we have the two-day schedule at Imola. There’s a lot that we need to learn about the car and tyres here in a short period and the drivers are having to get to grips with a track that they have not run on for many years. There are quite a few items of setup and car specification that we normally tune throughout the Friday, so it’s quite a challenge to get things in the right window and we need to do that to have a productive session. It also doesn’t give us long to work out how to get the most out of the car and tyres in the cold conditions. However, it’s the same challenge for all teams and will certainly make Qualifying and the race even more interesting.”

Jonathan Eddolls, AlphaTauri: “It has been a long, cold and wet day here at the Nürburgring and we didn’t even get to turn a wheel! A track we haven’t been to since 2013, we had a very busy Friday planned with many test items to understand what the optimum setup would be and also how to get the tyres to work in the expected very cold conditions. The temperatures this weekend are colder than we experienced throughout the whole of winter testing, so there is doubt over all of the learnings we have built up over the season on how to extract the most from them. We have our beliefs on how the tyres will behave, based on science and engineering, but we needed to put those into practice to confirm. Given the conditions, this has not been possible, so we will head into tomorrow with many unknowns, which should make for an interesting event. The weather for the rest of the weekend is looking better than today, but we have seen how slowly the track dries – it’s been wet since Monday – so potentially the first time we get to run dry tyres could be only in Quali or even the race. As said, given the unknowns of the new track, temperatures outside of the norm and the rain, it will be a challenging rest of the weekend but it’s one which opens up opportunities and we will aim to maximise these tomorrow and in the race!”

Racing Point: “It’s a shame that today was a non-event and we feel for the fans who missed seeing the cars out on track. By not running today, we’ve ended up with a preview of what the two-day format is going to be like in Imola! That loss of track time puts pressure on all the teams to maximise every lap tomorrow. Set-up time will be very limited ahead of qualifying, but it’s the same situation for everybody.”

Ferrari Report: “A shame, mainly for the thousands of fans who had braved the elements and did not get to see a single moment of track action. In pit lane, two people were equally disappointed with the lack of the first session. FDA (Ferrari Driver Academy) students Mick Schumacher and Callum Ilott were due to make their race weekend debut with Alfa Romeo Racing and Haas respectively. They will get another go, probably at the final race of the year in Abu Dhabi.”

Andrea Stella, McLaren: “We all want to go racing and it is always disappointing whenever a day is lost to bad weather – perhaps more so at a circuit that we’ve not visited in seven years. There are always decisions we need to take on Friday evening, and today we’ll have to make those based upon a combination of data from our simulations and what we can extrapolate from races at circuits with similar characteristics.

“Looking at the weather forecast, there is a chance FP3 will be dry. We’ll have a great deal of work to do testing and analysing tyre and aero performance. The drivers will be busy familiarising themselves with this very technical layout, that neither have visited before with a Formula 1 car. We have to work hard to get into a good position for qualifying and give ourselves the best chance of scoring good points on Sunday. We feel very sorry for the spectators who turned up today and hope that we can give them something to enjoy over the rest of the weekend.”