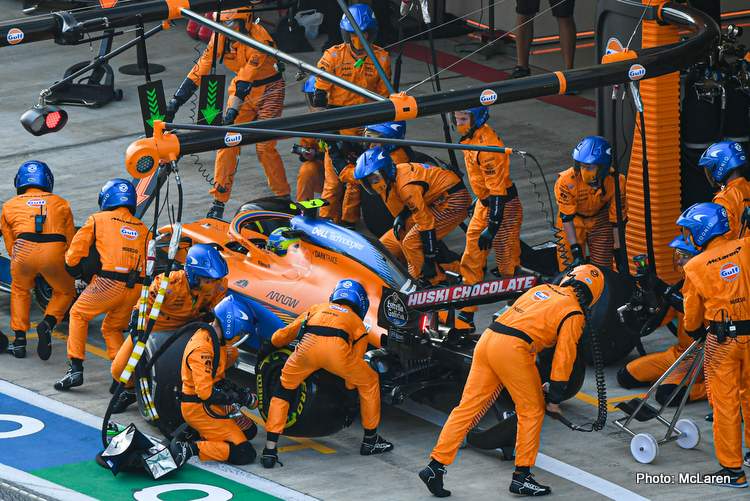 In the wake of their first non-points-scoring weekend of the 2020 season, at the Russian Grand Prix, McLaren are wounded and team principal Andreas Seidl is expecting his team to bounce back at his home race at the Nurburgring, in Germany this weekend.

In McLaren’s 2020 Eifel Grand Prix preview, Seidl said, “We came away from Russia with no Championship points which is a first for us this season. We’ve had the chance to reset, prepare and focus on our next race in Germany. As a team, we’re determined to come back stronger, but we know our rivals will also be challenging for good points.

“The team both the track and the factory have done an incredible job so far this season, but there are still seven races to go. Following on from the upgrades deployed in Russia, we’ll continue to upgrade the car and aim to improve performance over the remainder of the season. We need to keep consolidating our strengths, improving our weakness, being mentally resilient and pushing as one unified team in the fight for points.”

Seidl will be working as a F1 team boss for the first time on home soil, “Racing at the Nürburgring for the first time in F1 since 2013 is exciting for the sport. It’s a circuit I’ve done a lot of races at in varying conditions in my racing life. Due to the time of year, the weather could be an interesting challenge that we’ll have to factor in over the weekend.

“Travelling to my home country to go racing is always a special moment for me. It’ll also be great to see the German fans back in the grandstands and following the safety protocols in place to ensure everyone at track is safe. Hopefully, we can put on a good race that the fans deserve,” added the McLaren F1 boss.

Carlos Sainz is turning his final year with the Woking outfit into an expensive one after trashing the left-front of his McLaren in a stupid move on the opening lap of the race that seriously compromised his teammate Lando Norris who was forced to pit early for a puncture suffered during the incident.

At Mugello the round before Sochi, Carlos was involved in the restart melee which ended with hefty repair bills for all concerned, including the well bent #55 orange car.

The Spaniard explained in his preview, “The last race in Russia was definitely not the way I hoped to finish a weekend that had started off quite well. I always review in detail what I could have done differently, remember it and move on.

“We go racing again this week and my focus is now 100% on the Eifel Grand Prix,” affirmed Carlos, who departs McLaren for Ferrari at the end of the season.