Ocon: First stint in Russia was my strongest so far 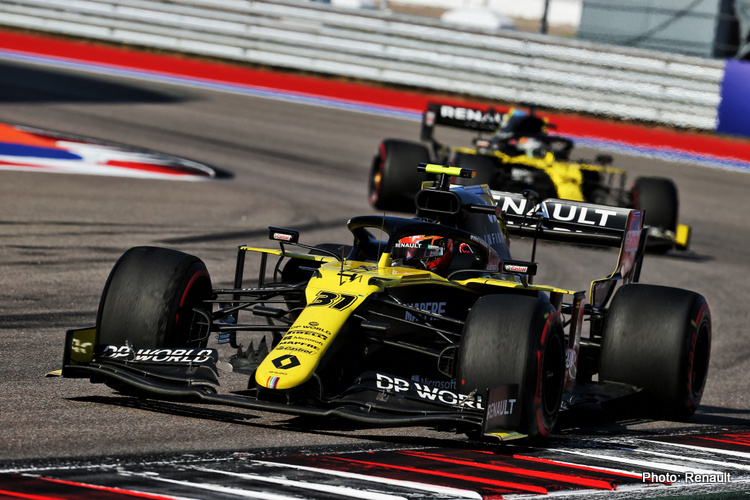 Renault’s Esteban Ocon is focusing on the positives of his performance at the Russian Grand Prix, despite a disappointing finish to the afternoon.

Starting seventh on the grid with soft tyres, the Frenchman managed to jump Carlos Sainz, Renault teammate Daniel Ricciardo and Sergio Perez to get up to fourth, and held that position until his pitstop.

However after stopping for hards on lap 18, he could not manage the requisite pace, conceding positions to Perez, Charles Leclerc and Ricciardo – the latter after being instructed to let him through by the pit wall – and ultimately finished seventh

Nevertheless Ocon, who has endured a so-so return to Formula 1 in 2020 after a year on the sidelines, suggested his effort was a significant step in the right direction.

“Probably the first part of the race I agree that it was probably the strongest of my season so far,” he told reporters afterwards. “I had a good start, and the pace was very, very strong. In that soft stint very comparable to Daniel, except that I managed to keep the tyres a bit more alive for a couple more laps, which definitely felt nice.

“Unfortunately, after the stop with the hard tyres, it was a bit more difficult. So we still have a few things to review on that. There were potentially a few more points on the table on my side possible.

“But you know, we’re getting there. It’s quite a good sign that we had such a good pace in the first stint.

“Obviously, it doesn’t feel fantastic because of that second stint, but I mean, it’s still a decent result for the team, because we are catching on the third place in the constructors’. So it’s all following well.”

Helping matters for Ocon is his growing confidence in the car, which has made significant improvement over the first ten races of the season.

“I think overall the target is to be consistent everywhere,” he said. “And at the moment, we had a good understanding, I think in the last couple races, with how we set up the car, and where we could improve. We had also a few small upgrades, which helps our performance.

“And I think if we’re coming back to Budapest, in Barcelona, I’m not saying we would qualify fifth or something, but I think things would have been different, as simple as that. I think we can extract more performance from the car now, with the understanding we have.”