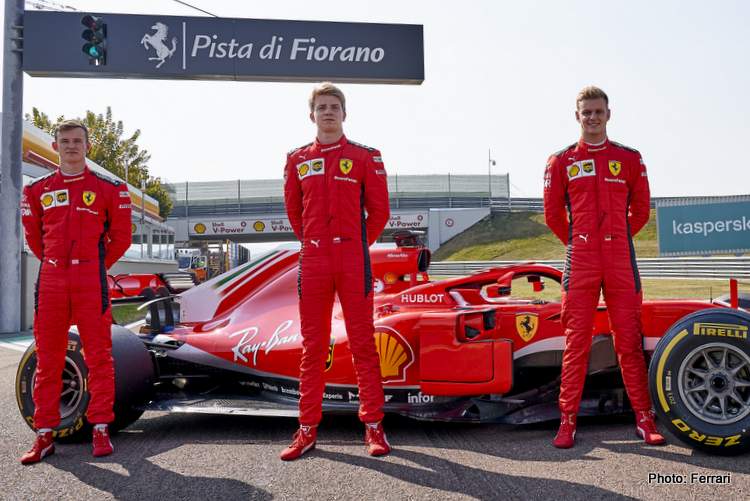 Three Ferrari bred young guns are being prepped for their first official Formula 1 practice sessions – Mick Schumacher, Callum Ilott and Robert Schwartzman – with a familiarisation test in the team’s 2018 car at Fiorano on Wednesday.

While Ferrari have gone to great lengths to play down the notion of a showdown. Perhaps it isn’t but if one guy shines and another doesn’t when they do FP1 duty be sure note will be taken. While nothing is confirmed the smart money is in Ferrari forking out money (or engine barter) for the traditional slot at Afla Romeo and going the extra mile for the trio and doing the same with their customers Haas.

It is highly unlikely the Reds will fork out for a third seat, and logic suggests one of the trio – the one who does not get the nod – will be a reserve and perhaps doing FP1 duty with Haas and Alfa Romeo next year while the ‘winners’ between now and decision time will be rookies if F1 next year.

For argument’s sake it indeed Alfa and Haas have a seat for a driver each, which two at this stage of the game deserve that promotion. Perhaps it is still early days to make a call but it is worth considering opinions on the matter.

Ben Stevens: “Schumacher and Schwartzman: Mick is a no-brainer given his championship-leading status, but I’m going with the young Russian over the Brit simply because I think the talent is greater.

“Of course with one season in F2 to Ilott’s two-plus, there’s a risk it might be too much too soon for Schwartzman but I’d rather take the gamble he could be the next Charles Leclerc than settle for a guy more like the next Antonio Giovinazzi.

Sam Tomlinson: “The success of Shwartzman leaves Ferrari in a difficult predicament. An Alfa Romeo seat that looked like it was to be reserved for Mick Schumacher really should be reserved for a driver with performance-based momentum on their side.”

“Performance-based momentum is integral for success in motorsport, and right now, that pendulum is swinging in favour of Mick. Without a doubt, it’s a difficult situation for Ferrari with three super successful drivers in Robert, Mick and Callum.

“Mick has proven his doubters wrong in the second half of this season, as seems to be his trademark move. In a time when Ferrari needs hope, trust in the system and stability, the team should once again turn to the Schumacher name.”

Will Dodds: This has been a very exciting F2 season, with drivers including Yuki Tsunoda and Christian Lundgaard really impressing, alongside the three Ferrari youngsters set to appear in FP1.

“Of the three, Robert Shwartzman is the least experienced and in his rookie season, with that perhaps showing in the last few weeks. His race pace was astoundingly good early on, but his qualifying speed has not been quite consistent enough and I think he would benefit from another year.

“As for Calum Ilott and Mick Schumacher, I think both have done more than enough to earn a promotion to either Alfa Romeo or Haas for next year. None of the current quartet have been quick enough often enough to be beyond criticism and I think the time has come to usher these two young talents in.”

Paul Velasco: “Mick has always had a shoe-in at Ferrari for obvious reasons, and they have never made a secret that the red carpet is out for the son of their greatest driver – Michael Schumacher. It was going to happen one way or the other. The bonus is it appears that the kid does have it and deserves the crack simply on merit.

“Furthermore, young Schumi is the next in the FDA pipeline of talent to step up to the top flight, a programme that produced the likes of Jules Bianchi and more recently Charles Leclerc.

“If Callum beats Robert in the championship and ticks all the boxes in his FP1 outing, next week in Germany, it should be him who gets the nod. With the Russian perhaps slotting in as reserve for his colleagues and doing another season of F2 as he was the only rookie of the trio in the feeder series this year.”