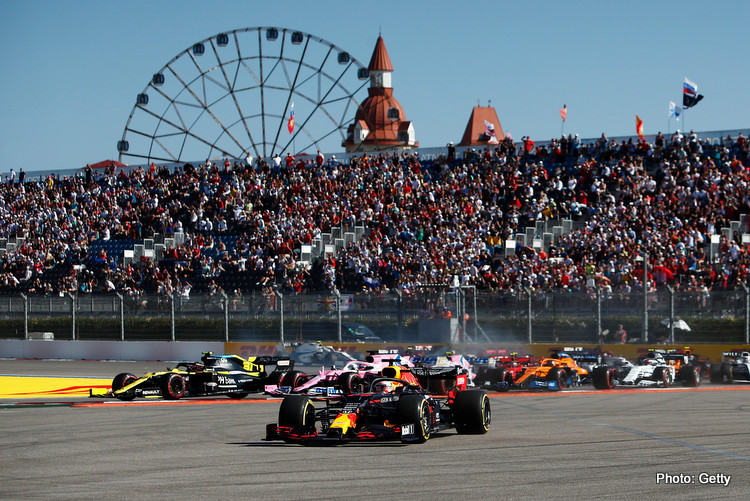 A tricky 90-degree right hander that narrows on exit as it approaches the left-hand kink that starts turn 3, the corner has been a constant source of controversy since the Russian Grand Prix joined the calendar in 2014, and the 2020 edition was no different.

When drivers run wide at the corner, they are expected to divert their car through a series of bollards before returning to the track, something that is easier said than done.

McLaren’s Carlos Sainz crashed while trying to round the bollards after a first-lap off, and Haas’ Romain Grosjean ran right through them later in the race.

Additionally, Ricciardo and Alexander Albon, who both only momentarily left the track, were given five-second penalties for not attempting to navigate the bollards at all.

Afterwards, Ricciardo said such a requirement of him made no sense.

“The geometry is weird, my situation for example, I locked up, it’s always going to be tight,” he explained.

“Just the way it is shaped it leaves you with hope until the very last minute or very last second I should say.

“By the point you have committed you can’t really go back across [to the bollards], you would lose more than five seconds, there is that point of no return and I got to that.”

The Australian went on to say he was not alone in his disdain for the corner.

“Turn 2 as they call it, a few of us drivers have been vocal, I think they could do something better with it in general. Even just to allow more overtaking for example. Maybe a different shaped corner, less of a such a short apex.

“They have quite a bit of room to play with, so we have talked about it in the past. So maybe that would eliminate the issue that we are having with this cut through.”

According to Russell, the Sochi track should look to Bahrain’s Sakhir circuit for inspiration.

“Turn 2 at this circuit is firstly one of the worst corners on the calendar and secondly for racing is a terrible design,” Russell said.

“I actually suggested this at a driver briefing earlier in the season: we’ve got the room and the space to create almost a Bahrain-style Turn 1 and 2, almost a hairpin into a kink.

“Firstly that would allow a driver to lunge one another into Turn 1, to give better racing, and also avoid people having to cut the track.

“When you go into a 90-degree corner that actually tightens up when you’re three or four abreast obviously cars are going to get pushed off.”

Asked about the driver’s opinions, FIA race director Michael Masi admitted there was “room for improvement” in how the run-off area is handled, although he maintains the current setup is a “reasonable solution”.

“Turn 2 has been one of those that’s been a challenge in different ways each year,” he said. “You fix things in one way, and it has another impact.

“So we’re trying to find the best solution, and I think we’ve found a reasonable solution.

That said, Masi made it clear he was not considering the use of gravel traps as an alternative.

“As I’ve said a number of times that there’s different solutions for different circuits, different corners, taking everything into account.

“Gravel is not a solution everywhere.

“With regards to speeds in run-offs, one of the things that obviously we’ve tried to achieve and aim to achieve is primarily that the rejoin in such circumstances is effectively funnelled in a way that it’s as safe as possible. That’s the primary objective.

“Secondary is to slow cars down if possible within that area.

“However, the nature of Turn 2, because of literally the nature of the corner, it’s very hard to find a one-size fits all solution.

“We’ll continue looking at it, and see what we can do.”