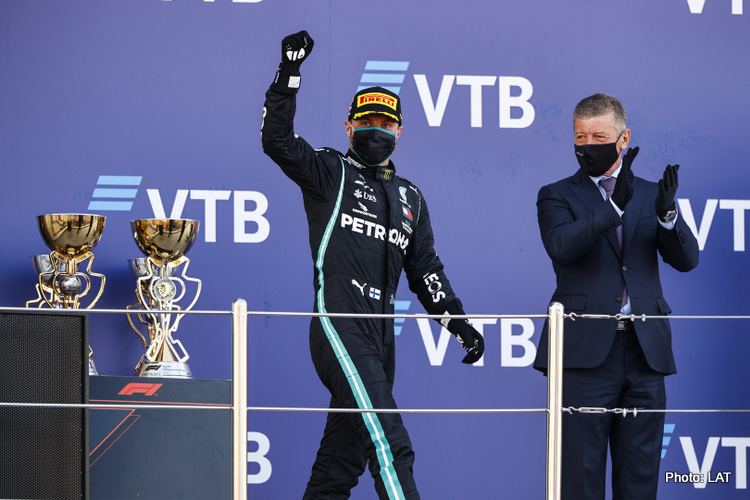 Mercedes’ Valtteri Bottas says he did not plan to lash-out at his critics after winning the Russian Grand Prix, but does not regret doing so in the moment.

Winning his second grand prix of the 2020 Formula 1 season and his first in nine races, Bottas finally provided an answer to the run of success enjoyed by teammate Lewis Hamilton, who won six over the same span.

After crossing the line, Bottas repeated his “to whom you may concern, fuck you” line from the 2019 Australian Grand Prix, with the Finn indicating he felt it again an appropriate message to his critics.

“You know, there’s been people telling me that I should not bother, I should give up,” he told reporters on Sunday. “But how I am, I will never do that so I just wanted to, again, send my best wishes to them. It just came out.”

Still 44 points behind Hamilton in the driver’s championship, the Finn has his work cut-out if he is to mount a serious challenge, although he maintains that whatever the results, he is still in the right headspace.

“The main thing is I’m confident,” he explained.

“When I come to every race weekend, I’m confident and I believe I can do it and that’s how I’m always going to be. You have to have that mindset so yeah, I’m glad. Even qualifying was tough, I didn’t give up.

“I looked at it positively, I knew there would be opportunities and things came to me in the race, so yeah, I hope I can encourage people not to give up because that’s the biggest mistake you can do in your life.”