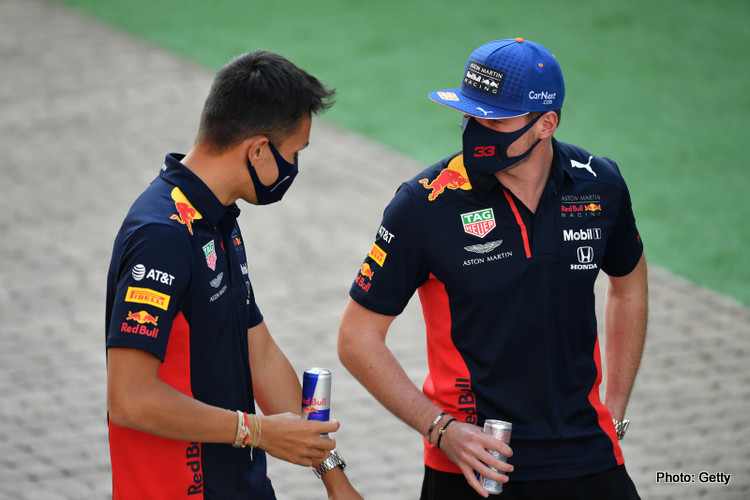 Alexander Albon has commended Red Bull teammate Max Verstappen for his straightforward approach to their partnership, with the Dutchman eshewing the political moves of other top drivers.

Now over a year removed from replacing the underperforming Pierre Gasly at the 2019 Belgian Grand Prix, Albon has similarly struggled to keep up with Verstappen, and finds his future subject to similar questions that once plagued the Frenchman.

However Red Bull have been vocal in their defense of the Thai, while Verstappen himself has argued “it doesn’t matter” who is beside him, as the result would be the same.

Asked about his teammate’s comments, Albon said it was indicative of the no-BS way in which Verstappen went about his business.

“To be honest working with him one-on-one you realise he is a really straight guy,” he told Sky Sports F1.

“I know there are a lot of drivers who create politics within the team, but Max isn’t one of them.

“We get on well, we have similar feedback and it’s nice to have someone like him to be racing against.”

Albon was also asked about his comments after claiming his maiden Formula 1 podium at the Tuscan Grand Prix, where he told the team “thank you for sticking with me”.

“I heard it back and I thought ‘oh God it’s like I said thanks for not getting rid of me!’” he joked.

“But it wasn’t like that, it was more ‘thanks for supporting me since day one’.

“Media talk, everyone talks, but the team has always been with me, and with that [in mind] it was more like ‘this is for you guys, this is what I can do’. Hopefully plenty more to come.”