The Day After: Vociferous Valtteri 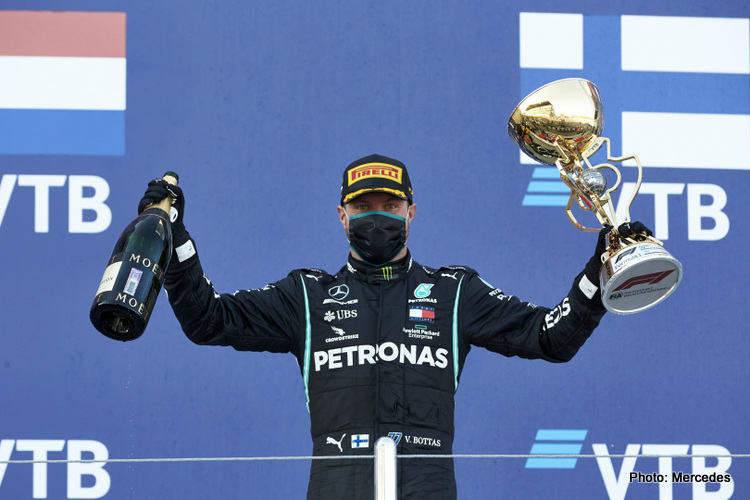 Scoring a win he sorely needed, Valtteri Bottas did not hold back in blasting his critics after the Russian Grand Prix on Sunday.

“Again it’s a nice moment to thank my critics… To whom it may concern, fuck you.”

Those were the words out of Valtteri Bottas’ mouth after taking the chequered flag yesterday in Sochi. The same words he had uttered after winning the 2019 Australian GP. Back then, it was in response to the flak he had copped during a 2018 season where he scored zero victories to Lewis Hamilton’s 11. People had wondered whether he should still be at the Silver Arrows in 2019, and yet there he was, proving them wrong. Then he uttered the same words on Sunday, supposedly proving the same critics wrong – however this time I’d argue it hasn’t had the same effect.

My first reaction – and I think the first reaction of many – was “huh? Was he driving in a different race to the one we just watched? Hell, is he competing in a different championship?” Yes, this victory wasn’t solely down to Hamilton’s penalty – Bottas starting on the mediums would’ve played a significant part regardless – but at the same time I don’t see how this performance really answers his critics.

As much as he might want us to believe this is the start of “Bottas 4.0” (or whatever firmware version we’re up to now), what this actually indicates is that more than at any other point in his Mercedes career, he is feeling the pressure. Understandably so.

While Bottas is never going to go after his team the way someone like Mark Webber would, he finds himself in a very similar position – he’s a number two who wants to be a number one, and the fact he can’t is something he has yet to come to terms with.

The stewarding in yesterday’s race could certainly be an article of its own, both in the Hamilton penalty, and the Charles Leclerc non-penalty for hitting Lance Stroll, yesterday proved that F1’s officiating needs an overhaul. There is too much confusion and too much inconsistency between stewarding groups and the race director for what is supposedly the world’s most prestigious motorsport series.

Did well to come back from a tough start and was ultimately a class unto himself at the front of the midfield.

Worst of the Day: Carlos Sainz

Carlos, if you’re going to run into walls like that for no reason, at least turn-off damage

Quote of the Day (non-Bottas edition):