Shovlin: We thought ‘they’re not going to like that’ 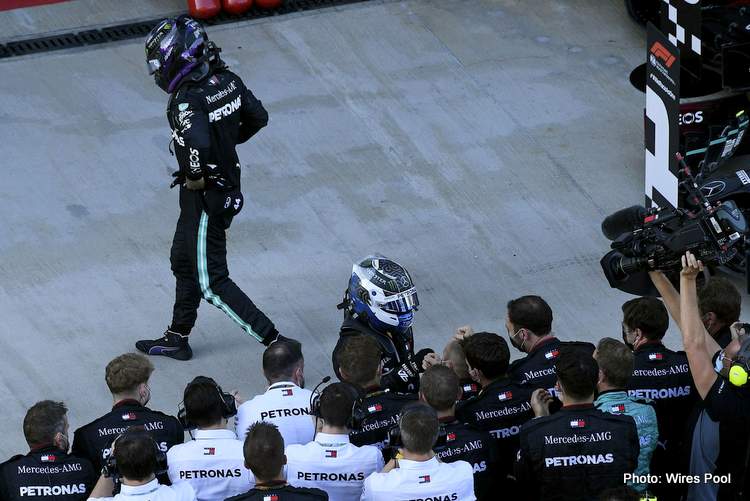 Mercedes knew Lewis Hamilton was going to be in trouble with Formula 1 stewards when they saw where he was practising his starts for the Russian Grand Prix, according to engineering director Andrew Shovlin.

The six-times world champion, on pole position at Sochi on Sunday, was handed two five-second penalties and ended up third in a race won by team mate Valtteri Bottas.

The penalties put on hold his bid to equal Michael Schumacher’s record 91 wins and trimmed his championship lead to 44 points.

Hamilton had asked Mercedes on his way to the grid whether he could practise starts further out of the pit lane where there was less discarded rubber, and was told to proceed.

“We hadn’t realised quite how far he was he was going to go,” said Shovlin. “We didn’t see the first one. When we saw the second one we thought ‘they’re not going to like that’.

“We thought it might have been ambiguous enough that we would have just got a telling-off. But when we saw the car position, it wasn’t a complete surprise that they didn’t like it.”

Shovlin said rivals could also have flagged it up to the governing FIA or stewards as much as the officials spotting for themselves.

Hamilton, surprised by the penalties, told reporters afterwards he did not think he had done anything out of the ordinary.

“If you look at probably every race that I’ve done this year, at least, I always start further down. Never, ever had a problem, done it for years,” he said.

“I don’t like to be on the rubber, that’s where everyone has done all their starts so it’s not representative of what it’s like on the grid, so I try to get onto the surface that doesn’t have any rubber.”

“We’ll just keep our heads down and keep fighting, keep trying to do a better job, be cleaner, squeaky clean”