Inside Line: Valtteri needs Nico Rosberg in his corner now! 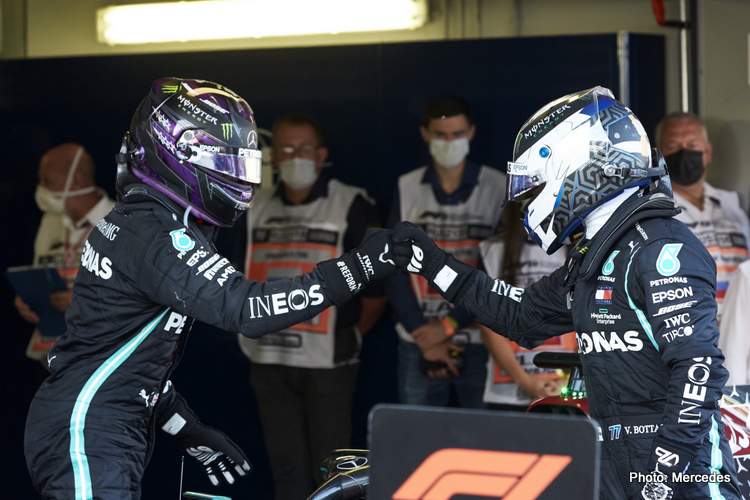 Its good news for the sport because we need someone to rattle Lewis as he rampages to his record-equalling seventh F1 title, if not stop him at least make him sweat for it.

While Valteri bagged the maximum points, Lewis – after his and his team’s prestart gaffe – finished third and the gap at the top of the standings is, ironically, 44.

Nevertheless, the question will always remain: had Lewis and his crew not got the start practices wrong, and not gotten the 10 seconds penalty, would the #77 have cruised to victory?

Whatever the case this win should galvanise Valtteri, and if he is smart and super serious about this title campaign, then I suggest: go get Nico Rosberg in your corner, make him coach and let him be the water bottle carrier.

Now that would piss Lewis off mightily. After all, Nico did snatch a title from the Briton in 2016 and, before that he did trounce Michael Schumacher at Mercedes for three years in a row. The guy knows the way around legends of our sport. He is a gold-mine of strategy for Valtteri to tap into.

The problem is the Finn never took the helping hand Nico offered when they swapped places. The one-time World Champ rode off into the sunset admitting he did not have it in him to go toe-to-toe again for an F1 title, one was enough. Boxes ticked. And reinvented himself as an excitable YouTuber.

But, at the time, he did offer advice to his replacement which was turned down…

Now, after the Sochi triumph and to keep the momentum, Valtteri would be well advised to eat humble pie, give Nico a call, invite him over and spend the weekend before the Eifel Grand Prix somewhere remote plotting the remainder of the campaign.

I propose the following ahead of the next race in Germany:

You get the drift? Even if you don’t mean it, you have to be mean at it. Apologise much later if you feel the need. Or do a Nico!

What would a Schumacher, a Senna, a Nico, even a Hamilton do under your circumstances?

In 2016, when Lewis’ Merc expired in Malaysia it was blatantly suggested that Merc were favouring Nico, soundbites that the British media latched on to, questioning the whole Sepang engine failure affair.

Lewis knows how to play the game from the day he walked into the sport at the highest level.

A couple of decades earlier, Ayrton arrived on the scene and off-track simply out mind-gamed everyone he teamed up with, then delivered stonking performances on-track.

Schumi delivered stonking performances at all costs, all the time, with teammates playing the secondary role without choice.

What did Lewis do in his rookie year with Fernando?

In fact, when Valtteri ‘goes on retreat’ with Nico this weekend they should binge-watch the entire 2007 F1 season (available on F1 TV Archives) and watch how cocky rookie Lewis humbled an arrogant double F1 World Champion at the time.

Anything less and Valtteri Bottas will simply be reduced to a long-line of forgotten F1 wingmen who paved the way for a rival’s greatness.

In closing, the only other driver with a car capable of winning would be doing us all a favour (including Lewis) and lit the fire in his belly and make the difference between this title race fizzling out to a farce long before season-end or turning into an epic of 2016 proportions.

Either way, Valtteri is the only guy who can make it happen, with help from Nico.