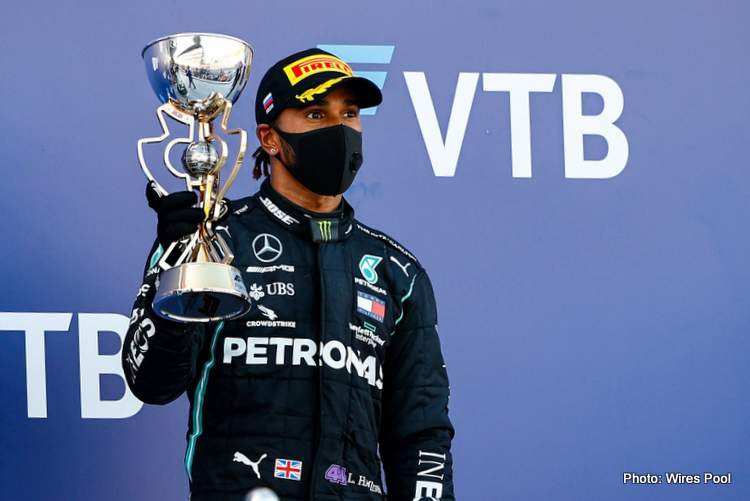 Two penalties during the 2020 Russian Grand Prix, amounting to ten seconds, cost Lewis Hamilton what might have been his record-equalling  91st Formula 1 victory and for a while added ten penalty points to his license.

But hours after the race, FIA Race Stewards reviewed the evidence presented by Mercedes which proves Hamilton was wrongly instructed by his pit-wall regarding where he could do his practice starts ahead of the race in Sochi.

As a result, the stewards confirmed in a statement that they had retracted the penalty points given to the World Champion:

“The Stewards received information from the team that the driver of car 44 had received a team instruction to perform the practice start in the incorrect place. This was confirmed by the stewards having listened to the audio between the team and the driver.

“Based on this information the stewards replace document 47 with this decision and therefore remove the penalty points imposed.”

Hamilton served his ten seconds penalty during the safety car instigated pit-stop window, rejoined down in tenth but was within a dozen laps or so was in third where he remained until the end of the race.

Prior to the retraction, he faced the prospect of possibly missing a race as he was living dangerously with the penalty points system but salvaged third place as consolation.

Instead, the Mercedes team were fined €25,000 after explaining that they were at fault for the pre-race infringement and that Hamilton was merely following Bonnington’s instructions. It means Hamilton will revert to eight points on his licence, four short of the 12 that would see him handed a one-race ban.

Speaking before the stewards’ U-turn, Hamilton said: “It is ridiculous, the points they have been giving this year.

“Penalty points are for putting someone else in danger or crashing into somebody, but I did not harm anyone. Going forward, I will make sure I don’t give them an excuse for anything.”

Hamilton’s teammate, Valtteri Bottas won the race on Sunday, followed home by Red Bull’s Max Verstappen but the World Champion still leads his teammate by 44 points in the drivers’ championship standings after ten of the 17 rounds.