Binotto: It was a step forward 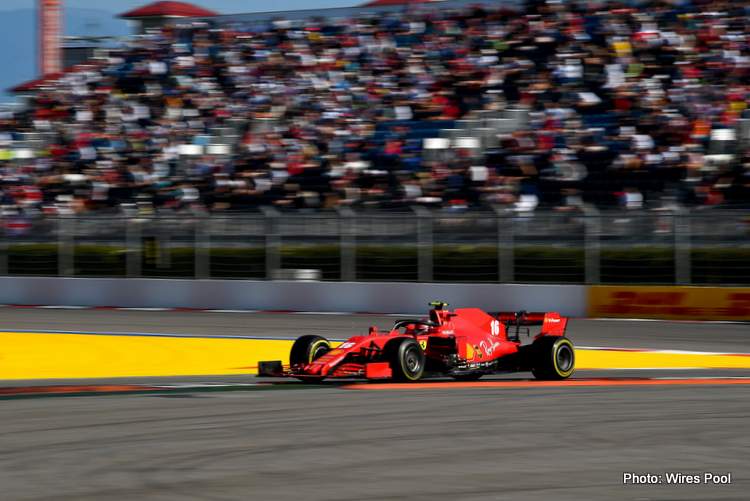 Ferrari can count their lucky stars that they left the 2020 Russian Grand Prix with sixth place for Charles Leclerc, a race in which the Reds were again woefully outclassed by the pace-setters.

Yet, after the race team principal, Mattia Binotto saw their performance in Sochi as a breakthrough for the beleaguered Italian team.

However, Charles was lucky not to receive a penalty for blatantly punting the Racing Point of Lance Stroll into the Sochi Autodrom barriers on the opening lap.

This after he had lucked-in when Carlos Sainz eliminated himself with a brainless prang exiting awkward Turn 2; with it also compromising the race of teammate Lando Norris who had to pit to replace a puncture because of the incident.

The #16 Ferrari was soon in eighth; after which the team reported, “From then on, he did a perfect job of managing the tyres, which was the key to his race. Leclerc was actually the third from last driver to make his stop on lap 29, going from Medium to Hard.

“Charles ran at a consistent pace and made no mistakes, thus making up two more places, getting ahead of Pierre Gasly and Esteban Ocon, to finish sixth behind Daniel Ricciardo.”

The two above mentioned DNFs, and Lando’s mishap, aided the Scuderia’s cause, these were three cars that would have most likely finished ahead of Charles.

But that’s racing, and Binotto was able to report some positives for a change, “To sum up the weekend, it was a step forward, at least compared to recent races, both in terms of the result and our performance level.

“Charles produced a solid drive to sixth, getting the most out of the package. He was aggressive after the start and then drove a very mature race for someone who is not yet 23.

“Sebastian was unable to get into the points, stuck in traffic in the key moments after the start. We brought a few small aero updates to Sochi: nothing radical in terms of performance but a step in the right direction for the development of the car.

“In a season when the gaps in the mid-field are very close, it doesn’t take much to move up the order. We must continue moving forward like this, starting with the next round in a fortnight at the Nürburgring,” added the Ferrari team chief.

Charles summed up his afternoon, “It was tricky at the beginning, as I had a pretty poor start and lost a few positions by turn one, but then I regained them immediately and from then on the performance was very good. Our pace was not too bad at all today.

“We were quite strong in our first stint on Medium tyres and we managed to go long on them also because I paid particular attention to tyre management today after we had seen a lot of degradation on Friday in our race simulation. I worked on it and I am glad it worked out well.

“We maximized what we had today and that’s the most important thing. It’s a positive weekend for us and this also helps us mentally,” ventured the Monaco Kid who last year started the race from pole position.

In the sister car,  teammate Sebastian Vettel laboured through the 53 laps to finish 13th, a lap behind the winner.

“It was a bit of a boring race,” ventured the German “As we didn’t have many options in terms of strategy. My start, from the dirty side of the track, was not ideal and so I couldn’t benefit from other people’s crashes and collisions. After the Safety Car period I was a bit stuck and I struggled to stay close to the cars in front of me.

“In the middle part of the race the car was quicker than yesterday in quali but I struggled to make the tyres last, partly because following other cars did not help. I did the maximum today but I was just not quick enough,” lamented the fourßtime F1 World Champion.

Ferrari, on 74 points, lie sixth in the 2020 F1 World Championship standings after ten of the 17 rounds, 292 points down on Mercedes at the top of the table. Leclerc is seventh and Vettel 13th in the drivers standings at this point.