Vettel: I tried to take a bit more risk 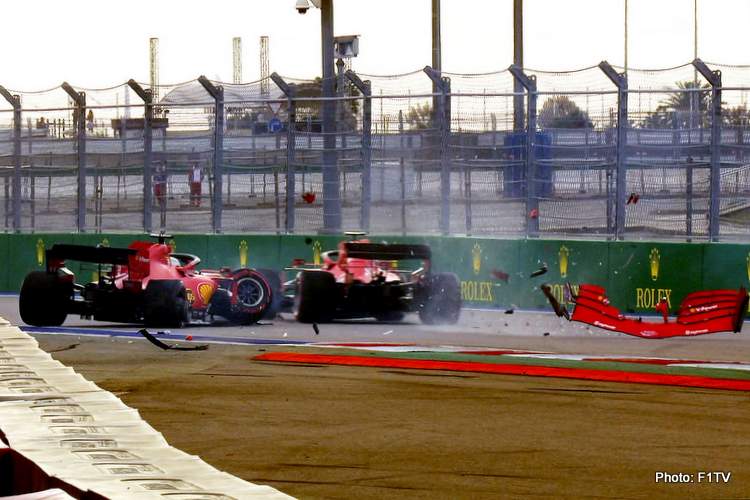 Sebastian Vettel emerged unscathed after a scary crash during qualifying for the 2020 Russian Grand Prix, the German lucky not to get collected by the other Ferrari of Charles Leclerc during the incident.

The German, whose list of self-inflicted crashes continues to grow, was obviously trying too hard in the cumbersome SF1000 “shitbox” he and his teammate are forced to drive.

The #5 red car clipped the inside sausage kerb in Turn 4, spun and clouted the wall before coming to a steaming halt on the side of the track with its wing detached and in the middle of the track. Seconds later Leclerc’s car arrived on the scene and only avoided hitting the car or wing by centimetres.

Vettel emerged unscathed and even helped marshals by fetching his wing, afterwards he admitted, “I lost the car. Already in Turn 2, I lost the car and then in Turn 4 I lost it again and couldn’t catch it anymore.

“I knew there was a bit of margin so I went for it and carried more speed in, but then lost the car quite suddenly and couldn’t catch it from there. In qualy, I was struggling especially in the first sector.

“I tried to take a bit more risk but, as I said, I lost the car already in Two, then in Four. Not happy, obviously, but compared to the morning session I struggled quite a bit in the afternoon.”

Ferrari have again been woeful, their car that sat on pole at the venue last year was not good enough for Q1, even in Leclerc’s hands. The pain is likely to continue in the race on Sunday.

Vettel added, “We’ll see. It wasn’t too bad up to qualifying. Qualifying then was quite a bit worse, but the rest was ok.”

Last year in Sochi, Vettel was third in qualifying a few hundredths off Lewis Hamilton in second, while Leclerc claimed pole position by four-tenths over the Mercedes driver who will start Sunday’s race from pole.

Thankfully he was unharmed after this hit, but it brought out the red flag during Q2 🚩#RussianGP 🇷🇺 #F1 pic.twitter.com/gTdkJRsghU