Verstappen: Who knows what can happen into Turn 2 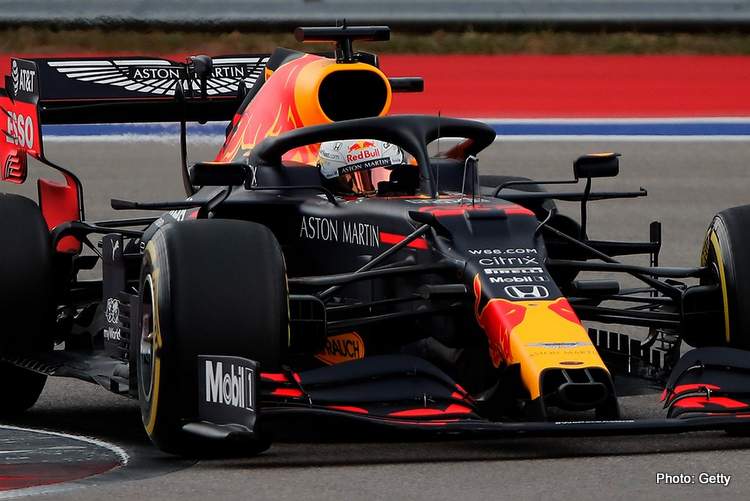 Thank God for Max Verstappen! Yet again the Red Bull driver rose to the occasion, this time in qualifying for the 2020 Russian Grand Prix when, against the odds and out of the blue, he split the mighty Mercedes duo.

Clearly lacking the firepower of Mercedes and perhaps even training Renault’s newfound pace, Max was never really in the hunt, even in free practice it was obvious he did not have the goods. But that sublime final effort of 1:31.867 was enough to knock Valtteri Bottas from a sure second place to third.

The immensity of his feat illustrated by the fact that the Dutchman was 1.2 seconds faster than teammate Alex Albon in the other Red Bull.

It was a fine lap, which even surprised Max, “P2 was very unexpected and I don’t say this often but I think this was one of my best ever qualifying laps and it felt really good. I was struggling a bit in Q1 and Q2 with the balance of the car and we made some small improvements to stabilise everything and in Q3, especially on the second run, they worked and the lap was good.

“Of course, we want to fight for pole and wins but this year it is not possible all the time, so then to be able to split the two Mercedes cars is very satisfying and I’m happy to be on the front row here.

“I’m starting on the dirty side of the grid which does make a difference with the initial launch but I’m also on the medium tyre which is the best way for us. If we can have a decent start, the tow effect is very big so who knows what can happen into Turn 2.

“I think the Mercedes does still have more overall pace so they will be hard to beat but I’m happy with today and I think we really extracted more than we thought was possible and we can be very happy with that,” declared Max who has never celebrated on the Sochi podium – Sunday might change that.

His boss Christian Horner was equally surprised, “We certainly didn’t expect to be on the front row coming into the weekend as Sochi has always been one of our weaker tracks, so it is very satisfying to be able to split the two Mercedes today.

“Max played it very smart in the final lap of Q3. He waited for Bottas to finish his lap and then got a tow from him all the way down from Turn One to Turn Two, meaning he was already a tenth up at the exit of Turn Two.

“He then had to get the rest of the lap spot on, which he did and P2 was a phenomenal result with arguably one of the best laps he’s driven this season<” ventured the Red Bull team boss.

How to fully send it around Sochi with the help of @redbullracingES 💪 #RussianGP 🇷🇺 #F1 pic.twitter.com/pdz6pRKoEm