Ricciardo: We can definitely race so it should be fun 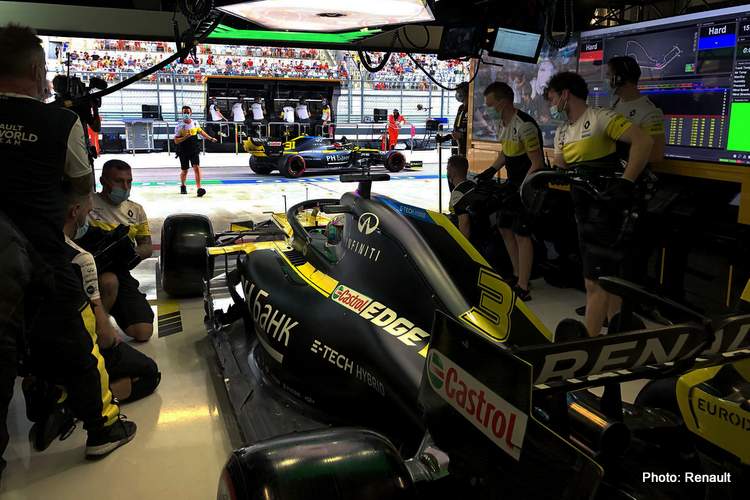 Renault have stepped it up in recent races, the fruits of their graft rewarded with fifth-place on the grid for the 2020 Russian Grand Prix thanks to the efforts of Daniel Ricciardo on the day.

All four of the Renault powered cars were in the top eight at the end of the dramatic qualifying in Sochi on Saturday, less than half a second separating the quartet on the final timesheets, with Dan top of the heap with a best lap time of 1:32.364.

The Australian said in the team report, “Overall, I’m happy with fifth position for tomorrow. I knew we weren’t in contention for pole position, but after the Q2 lap it felt like third or fourth was in reach.

“That lap in Q2 was perfect, so I knew it was going to be hard to improve on that. I did struggle a little more in Q3 and probably could have improved my time, but I am happy with where we ended up.

“I haven’t normally been strong at this circuit so to be quick all weekend is a positive. We can definitely race tomorrow so it should be fun,” added Dan.

Esteban Ocon was a quarter-second down on his teammate in the final Q3 run but was content with his performance, “I think it’s a very decent result today. We’ve shown great pace this weekend and it’s definitely been strong with the car performing quite well.

“On my side, I’m happy with the result and the car was really good through all three sessions. All in all, we’re in the fight for tomorrow, so that’s very positive. It’s great to be starting where we are, and we can have a look at the cars in front.

“We’re going to be in the mix to fight, so it’s going to be interesting tomorrow. I think anything is possible and we are in good shape to race,” concluded the Frenchman.

Renault sporting director Alan Permane echoed his drivers’ enthusiasm, “It’s nice to feel disappointed with fifth as, arguably, we could have been fourth with Daniel had he repeated his lap from Q2. That was almost a perfect lap and he couldn’t quite get there in Q3.

“We’re in good shape for tomorrow with both cars well inside the top ten. We’ll be looking for a very good points haul and to continue our decent form in races,” he added.