Ricciardo: Fernando return exciting for not only Renault but F1 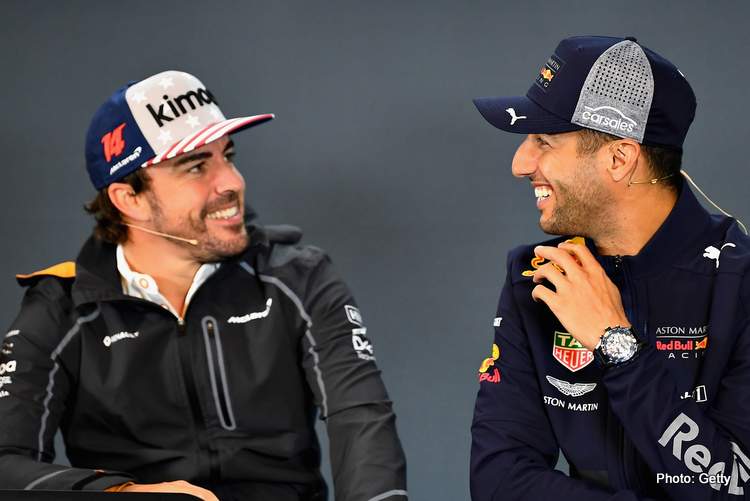 Fernando Alonso is in the house! This week his tour of the Renault F1 factory in France had social media in a frenzy, but Daniel Ricciardo – whose departure made way for the double F1 world champion’s return – is not fazed by the diverted attention.

The Australian told Racer that he relishing the prospect of the double F1 World Champion’s return to the top flight next year, “Fernando coming in and going on the simulator the last few days, that is exciting for the team. I certainly do not feel like I am in any way shape or form left on the side.

Dan will move to Mercedes-powered McLaren next year but intends giving it hi best shot until the very end with Renault, “I’m still working a lot with the team to develop the car for this year, and obviously Fernando’s return is exciting for not only Renault but F1.

“So it is all been pretty good. I think I will just keep getting the results and that keeps everyone happy,” ventured the 31-year-old.

In retrospect, if one were to drool poetic, Ricciardo-Renault was hardly a marriage but rather a French affair that has been cut short by the whims of fate to allow for the return of their version of the prodigal son.

“When I announced there were some emotions, as expected,” Ricciardo recalled. “The biggest thing for me was to reiterate my intention to fulfill everything for the remainder of this year and to give it all I had.

“At the time you say these things, whether it is over the phone or in person eventually, but your actions have to do the talking. It is all well and good saying I’m going to do my best this year and put in everything I can. But if I’m finishing at the back of the pack it does not seem like I am I’m living up to it.

“I feel like certainly once we got racing and the results that we are turning in, I think they can tell now that I’m trying to be true to my word and live up to that. We are getting on with it,” added the Aussie.

For a change, Alonso may have struck it lucky with the timing of his return as Renault have found some extra grunt that has them better than Honda and Ferrari at this stage of the PU pecking order.

This has not escaped Fernando, “I think the team is in good shape for the future. The last few races were encouraging for everyone, for myself too. To see Renault back in a competitive manner is a good thing for the sport and I’ve been delighted to see the improvements.

“We’ve still got a long way to go and the midfield is very tight but I think the guys have done an amazing job trackside. The last couple of races were very exciting to watch and I am looking forward to being back in the mix.

“I’ll now follow what the team needs from my side — some sim days, helping some weekends and being available for the team for anything they need,” added the man from Oviedo.