Perez: A podium could be difficult but anything can happen 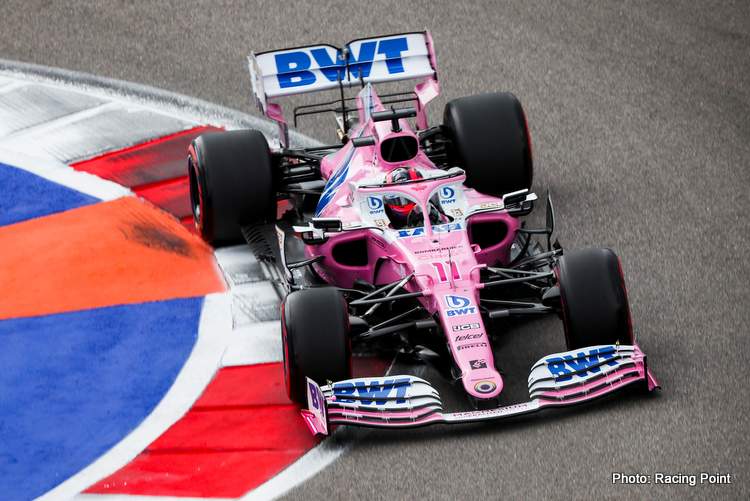 Sergio Perez may be out of a job right now, but he did his shares the world of good on Saturday by claiming fourth spot on the grid for Sunday’s 2020 Russian Grand Prix.

The Racing Point driver has been ousted from the team (to become Aston Martin in 2020) by incoming Sebastian Vettel who happened to crashed his Ferrari during qualifying at Sochi.

In sharp contrast, Checo has been at the sharp end of proceedings all weekend despite not having the updates his teammate Lance Stroll had bolted to his car. While the Mexican made it through to Q3 the Canadian was stranded in qQ2.

At one point he looked good for third, but a flyer by Max Verstappen knocked him a notch down, Checo reported afterwards, “I’m very happy with our performance today: I think P4 was the maximum I could achieve because Max and the two Mercedes were very strong out there.

“We were able to qualify ahead of our nearest rivals, which is the main thing. It was a really tough session because the wind kept changing and we had the disruption of the red flag too. It’s a credit to the team that we were able to manage the sessions so well and extract the maximum from the car.

“A podium could be difficult to achieve here, but anything can happen at the start with the long run to Turn 2. If we make a strong start and manage the tyres well, I think we can fight for a good result tomorrow,” added the 30-year-old from Guadalajara

In the sister car, Lance never found the sweetspot, either the updates have flopped or the boss’ son did not extract the maximum from the package as his teammate had in the older version of the car.

Lance said afterwards, “It was a tough day. We were all set for the final few minutes of Q2 and raring to go after the red flag. Sadly, the engine was overheating while we were in the fast lane so we took the precaution of switching off the car.

“It’s frustrating because we’ve made it into Q3 consistently this year. I’ve not quite found my rhythm here yet; I just need to put together the finer details and come back stronger tomorrow.

“It’s not easy to overtake here, but we have a quick race car. If we can get a good start and make some early progress, then it’s all to play for in terms of points,” added the 21-year-old

Team boss Otmar Szafnauer shared his perspective, “A session of mixed fortunes with small margins making a big difference today. A fourth place for Sergio is well-deserved and should allow us to make the most of our competitive race pace tomorrow.

“Lance lines up in P13 – largely due to the red flag, which interrupted his quickest lap in the final minutes of Q2. It led to the squabble for track position with cars queueing in the pit lane as we tried to second guess when the session would restart.

“Unfortunately, the power unit was overheating and we asked Lance to switch the car off. He deserved more from today, but he will be strong tomorrow, and at least he will get a free choice of tyres for the start of the race,” added the Racing Point team boss.